Today's Top Stories
1
Priyanka Pulls Back the Curtain
2
Could This Be the Last Year of Roe v. Wade?
3
What to Buy From Madewell's Secret Stock Sale
4
Jaclyn Rothenberg Pursues Pantsuits In Every Color
5
Listen to the Best New Love Songs of 2021 (So Far)
Pierre SuuGetty Images

At the height of her blockbuster career, Shailene Woodley was grappling with a "very scary" illness, the actor revealed to the New York Times in a new interview. "I haven’t spoken much about this yet publicly, and I will one day, but I was very, very sick in my early 20s," she said. "While I was doing the Divergent movies and working hard, I also was struggling with a deeply personal, very scary physical situation."

At times, she feared her illness would end her career: "Am I going to survive what I’m going through right now and ever be healthy, or even have the opportunity to work on projects I’m passionate about again because of the situation I’m in?" she recalled thinking.

"I was in a place where I had no choice but to just surrender and let go of my career, and it brought out this negative voice in my mind that kept spinning for years and years afterward," Woodley said.

She told the newspaper she's now "on the other side" of her illness, adding, "A lot of the last few years has been about focusing on mental health for me, and it’s a slow process. But because of that work, I feel very grounded and rooted in who I am and very clear about everything in my life, whether it’s my career or my relationships or my own internal worth."

"I feel very grateful to have walked that line of fire," she said, "because now I know what I don’t want to ever go back to." 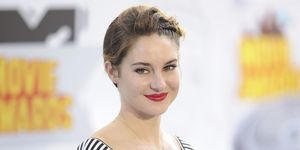 Shailene Woodley Won't Do the 'Divergent' TV Show
Emily Dixon Emily Dixon is a British journalist who’s contributed to CNN, Teen Vogue, Time, Glamour, The Guardian, Wonderland, The Big Roundtable, Bust, and more, on everything from mental health to fashion to political activism to feminist zine collectives.
This content is created and maintained by a third party, and imported onto this page to help users provide their email addresses. You may be able to find more information about this and similar content at piano.io
Advertisement - Continue Reading Below
More From Celebrity
Kate and Charlotte Hunt for Spiders Together
Princess Diana's Nieces Opened Up About Their Aunt
Advertisement - Continue Reading Below
Elizabeth Hurley, 55, Shows Off Toned Abs On Insta
Keira Knightley Won't Do Nude Scenes Filmed by Men
Kourtney Kardashian Is Dating Travis Barker
Priyanka Chopra Jonas Talks Her New Memoir
Priyanka and Nick on Their Quarantine Quality Time
Priyanka Pulls Back the Curtain
Sussexes Will Return to Social Media, Harry Said
A-Rod Celebrated J.Lo's Inauguration Performance