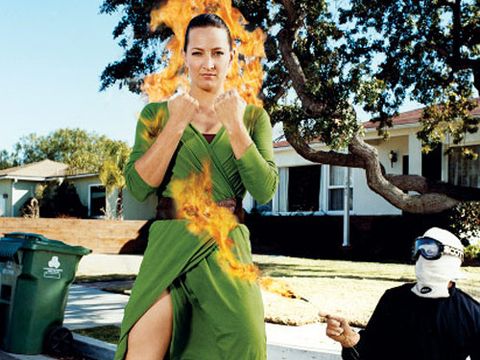 ZOË BELL HAS spent a good deal of her acting debut riding spread-eagle on the hood of a white Dodge Challenger while a sicko in a black Charger slams her car into guardrails. The movie, called Death Proof-the Quentin Tarantino-directed half of a double bill of horror called Grindhouse, opening this month-is a slam-bang homage to the race-and-chase movies of the 1970s. The hazardous duty is no big deal to Bell, although looking into a camera is.

One of the biggest lies in the film business is that stars do their own stunts. No-body would underwrite $100 million in production costs if that really were Tom Cruise jumping off a Shanghai skyscraper. But Bell is a bona fide butt-kicker, the muscle behind Xena: Warrior Princess who picked up a pair of Taurus awards (the Oscar of the stunt world) for playing Uma Thurman's double in Kill Bill: Volume 2, also directed by Tarantino. Offering Bell the first starring role of her career, Tarantino knew how to recruit her for Death Proof: with a detailed description of the big stunt finale. "I forgot I even had dialogue," says Bell, who is tall with movie-star curves that she undercuts with bloke-ish aplomb. "I was like, 'Sweet, dude. Car stuff! That'd be a buzz.'" Bell's costar Rosario Dawson describes the way most actresses read a script, focusing on the dialogue and skimming past things like car chases. "But Zo's exactly the opposite," she says. "She goes 'blah, blah, blah' past the scene and reads the action."

In the scene on the white Challenger, Bell's only support is a sturdy harness she keeps hidden under her costume. She has used rigs like this before-in her native New Zealand, doubling for Lucy Lawless on Xena, she spent entire days suspended in the air. But back then Bell was only fighting gods; here, she plays bump-and-run at 50 mph while hooked to the hood of a muscle car by a single steel cable. After almost every take, she drops her black jeans so a stunt rigger can fine-tune her "crotchless nappy"-her name for the girdle of straps and buckles that helps keep her in one piece. On-screen or off, Bell can be one of the boys-a necessary skill if you do stunts in Hollywood movies.

The job is particularly hard on women, who have to take the same bruising falls and punches as men do, but often in skimpy outfits; you can't hide much protective padding under a bikini. And the work, by its very nature, is anonymous. "People say, 'But you've won awards-you should be getting hired!'" says Bell, who lives in Venice Beach, CA, and is recently separated from a Kill Bill crew member. "Pro-ducers don't give a shit if I've won awards. Posters don't say, 'Latest movie starring'-not even 'starring,' 'involving'-'award-winning stuntwoman Zoë Bell.'" When she tore a ligament in her wrist in the final days of Kill Bill, which took a few metal pins and a year's worth of rehab to repair, calls for jobs more or less stopped. Enter Tarantino, the only one to think of violating the Hollywood caste system by putting a stuntwoman in a leading role.

Most stunt people were born into the business. Bell, on the other hand, was born at home on Waiheke Island, 12 miles off the coast of Auck-land. Her father was the island doctor, her mom a nurse, and Bell spent long days in the bush with no other instructions than to be back before dark. Her idealistic upbringing gave her confidence in her ability to land on her feet, literally and metaphorically.

It also gave her an aura of good karma, which you can practically see when she's on the set-riding the hood of the Challenger, screaming in terror as the Charger slams her along 80 feet of guardrail. But when she moves out of the shot, she cracks up the crew by spreading out her arms with a flourish, Nadia Comaneci-style. As she rides off for the last run of the day, Buddy Joe Hooker, the stunt driver who'll pummel her against the rails, calls out, "Have fun, Zo!"From her perch Bell waves back, "Thanks, love"-just another day at work.