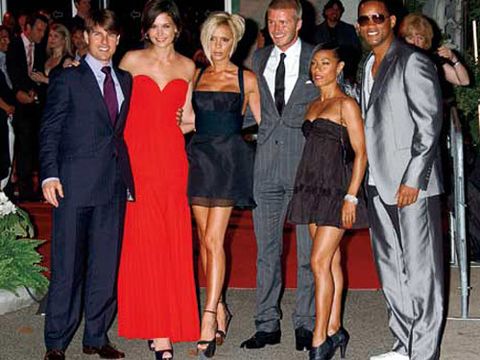 WHEN YOU FIRST meet the Beckhams, you don't exactly meet the Beckhams, especially not at a junket for the American launch of their empire — er, new fragrance. First you wait for the Beckhams in a holding room in a sun-dappled suite at L.A.'s Hotel Bel-Air. You sample the bottled goods: This is what the Beckhams smell like! Then you sign a release form: You will not defame the Beckhams. Then you are escorted to them.

David and Victoria stand up to greet you, and you wonder whether the large suited dude crushing your fingers is their one-man security detail. He's not. He's actually a perfume executive, and he'll tell you: "Intimately Beckham has exceeded $100 million in the last 12 months, and next year, we expect the figure to double." He'll offer up the bottom line because Victoria Beckham will ask him to. "Go on," she'll say, "give the numbers."

Victoria Beckham has trophy clavicles and the arms of a flyweight champion. Twin golden blades of hair sweep past her jaw; the diamond on her finger is itself a sparkling fist. She's wearing heels of precarious height and a tiny lavender Hervé Léger dress on which black lines meet at right angles. And when she sits next to her husband (he who famously bends it), Victoria (she who famously spent many Posh years strutting around in a wig and PVC catsuit) looks like the dominant one. This is odd because David is considerably larger than his wife in every way imaginable, yet in person she totally eclipses him.

Check out our new Fragrance Finder tool for more perfumes and to find your signature scent.

He's wearing his hair military short, and he's boyish to such an extreme that I want to take him out back and kick the ball around while the adults do adult things. He slouches, elbows on knees, and speaks softly about Intimately Beckham in sound bites tempered for SportsCenter. It seems like he's been practicing.

Then Victoria Beckham starts going, and nothing can stop her. She's shrewd, politic, and passionate and speaks knowingly in her saucy British accent about market research, current sales trends, and the conglomerate she resolutely refers to as "The House of Beckham."

I ask whether Intimately Beckham (there's one for him, one for her) is a kind of autobiography in a bottle, and Victoria lunges toward me, slow, sharklike: "It is Us," she says.

She deflects, saying only that "Us" has to do with tuberoses and David's desire to develop something "spicy."

So I'm to believe that the Beckhams are all flowers and heat?

Hardly. L.A.'s newest celebrity couple is sharper than that. Especially Victoria. The newly minted, TomKat-approved Stateside mogul and mother of three clearly knows how to capture minds, hearts, and dollars: by teasing with beauty, by surprising with smarts, and by plying a reporter with alcohol. Eventually she will look me in the face, grab my shoulders, massage them vigorously, and instruct, "Have a few drinks!"

She thinks I'm too serious.

Not serious; just terrified. I have seen the future, and it smells like the Beckhams.