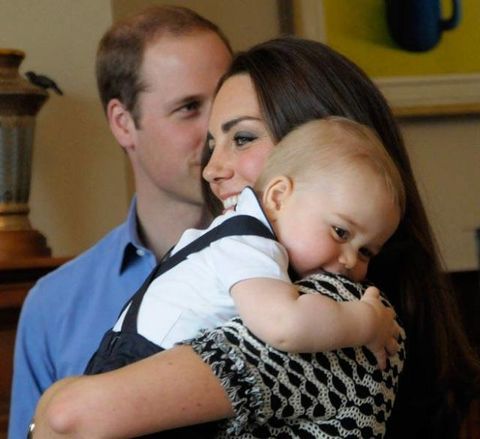 The royal tour to New Zealand and Australia captured our hearts for many reasons—Maori kisses, the iconic jetset fashion, the genuine attempts at DJing. But the best part, without fail, revolved around Prince George and a certain playdate, where the little prince delighted in playing with his toys and his mother's long locks. The photos from the visit were simply adorable and far more memorable than most. And it turns out that Kate Middleton agrees with us.

According to Hello Magazine, the Duchess of Cambridge has seen the images of Prince George throughout the tour and has one favorite: the photograph of the prince smiling on her shoulder.

The photograph was taken by professional photographer and Wellington City councillor Simon Woolf. "She said it was just lovely and that it was her favourite photo of the tour," Simon told reporters. The photographer was so touched that he presented the royal couple with a black and white version of the photograph at the end of their time in New Zealand. And he said he has plans to send more copies to Prince George's grandparents and great grandmother, the queen.

This content is created and maintained by a third party, and imported onto this page to help users provide their email addresses. You may be able to find more information about this and similar content at piano.io
Advertisement - Continue Reading Below
More From Celebrity
Marvelous Women Scarlett Johansson & Florence Pugh
Gigi Shares Glimpse at Baby's Wardrobe
Advertisement - Continue Reading Below
Matthew McConaughey and His Son Are Twinning
Ashley Graham Opened Up About Sex After Childbirth
Brad Pitt and Nicole Poturalski Have Broken Up
Chrissy Teigen Shared a Sweet Video With Luna
EmRata Displayed Her Bump in an Open Button-Down
Harry Sent a Legal Warning Over "False" Article
Chrissy Teigen Talked About Her Baby Loss Photos
Chrissy Teigen Opens Up About Her Loss