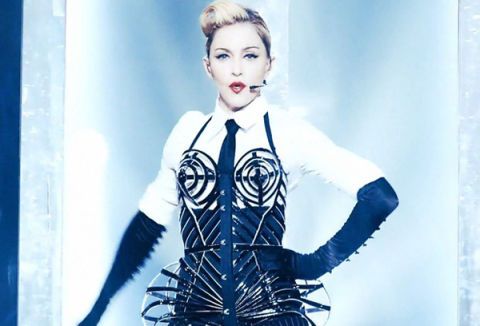 Madonna fans have noticed a possible team-up with Apple.

Madonna's new album: What we know so far

The speculation was increased further when someone noticed that saying 'Unapologetic Bitch' into Siri swiftly loads Madonna's Wikipedia page, seemingly creating a link between the service and the superstar.

What's more, while simply typing 'Unapologetic Bitch' into Google or Bing does bring up results relating to Madonna, the star's main Wikipedia page isn't even within the first 30 search results.

It wouldn't be the first time the Cupertino-based company has teamed up with a female superstar. iTunes exclusively launched Beyoncé's self-titled album last December, after she surprised fans with a stealth release on the store.

Madonna has yet to confirm the release date for her 13th studio album, but has been teasing the recording process on Instagram with the hashtag #UnapologeticBitch.

We reached out to Siri for confirmation of a possible Madonna collaboration, but they declined to comment.

From the editors at Digital Spy.
Digital Spy DigitalSpy.com
This content is created and maintained by a third party, and imported onto this page to help users provide their email addresses. You may be able to find more information about this and similar content at piano.io
Advertisement - Continue Reading Below
More From Music
Princess Diana's Butler Talks 'The Crown'
Reese & Ryan's Son, Deacon, Drops His First Single
Advertisement - Continue Reading Below
Life Advice From an Icon, Cher
J.Lo Is Basically Naked on Her New Single Cover
Karaoke Songs Anyone (Yes, Anyone) Can Rock
Um, This Dude Claims Lady Gaga Stole “Shallow”
Sad Taylor Swift Is the Best Taylor Swift
Jennifer Lopez's NYC Concert Was Evacuated
Miley Cyrus Channels Britney Spears' Iconic Look
Ginger Spice Apologizes for Leaving Spice Girls