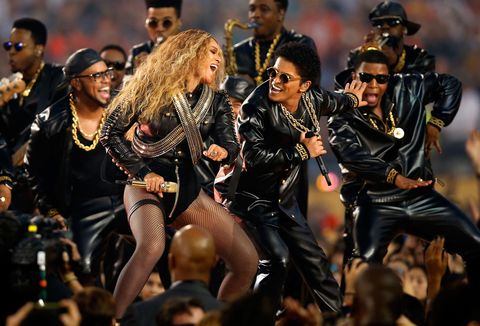 Super Bowl 50 is officially over, because Beyoncé has shut it down. After Coldplay did their thing and Bruno Mars sang part of "Uptown Funk," the queen appeared with a small army of dancers and performed her new song "Formation."  There were so many of them that they had to dance on the actual field, because no stage can contain her greatness. Beyoncé then brought a smaller contingent up on stage with her for a dance battle with Bruno and his crew, which she handily won because she's Beyoncé.

Following the dance battle, Coldplay reappeared to soundtrack a montage of great halftime shows past, then brought Bruno and Beyoncé back out for a singalong of "Up & Up." Oh, and then Beyoncé announced a world tour. Time to go home now, this sporting event has finished.