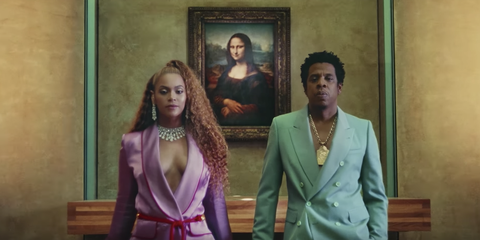 Beyoncé and Jay-Z just released a new surprise album called Everything Is Love. The nine-track collaboration is streaming exclusively on Tidal and it's not just a Beyoncé and Jay-Z album; the couple released the new album jointly under the name The Carters.

The first single, "APES**T," is available on Beyoncé's YouTube channel and it's incredible. For the video, directed in May by Ricky Saiz, Bey and Jay took over The Louvre in Paris (you know, as only the Carters could).

The couple, currently touring together for their On the Run II Tour, announced the album on Saturday night during a concert in London and led the crowd in a countdown to its official release.

Beyoncé also promoted the new video on Instagram, not that it needs any extra promotion.

Beyoncé and Jay-Z's oldest daughter, Blue Ivy, also makes a cameo in the video, sweetly wishing a "shout out to Rumi and Sir, love Blue."

Tidal users are also being treated to a bonus track, "Salud," which is exclusive to the service.

Beyoncé is no stranger to surprise albums—her last two records, Beyoncé and Lemonade, were both surprises (the best kind of surprise, to be sure) for fans. Lemonade was released in 2016 and Jay-Z's last album, 4:44, was released in 2017. Bey and Jay are continuing the international leg of their On The Run II tour through the fall, and we can't help but wonder if some of the Everything Is Love songs will be worked into the set going forward.

Listen to the entire album (bonus track and all) here.