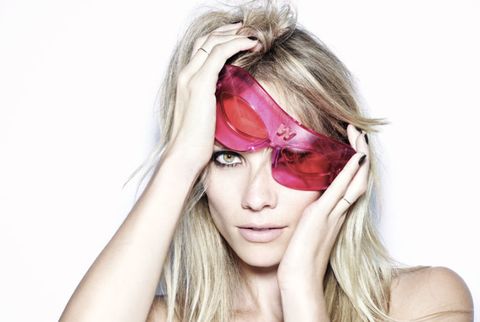 Glamazon Nanna Øland Fabricius is a tall stick of Danish dynamite with the cheekbones of a European model, the dreamy voice of a pop princess, and dance moves that rival Martha Graham's. A former ballerina, she spent eight years revolting against the Bohemian, music-drenched Copenhagen cottage she grew up in — mom was an opera star, dad a composer — by fleeing to the rules-driven world of the Royal Ballet School. "It was strange — who rebels with ballet?" laughs Oh Land. "But dance was the closest I could be to music without saying, 'I'm going to be a musician just like you thought.'"

Despite her best efforts to shrug off the family legacy, a fractured spinal disk cut short her ballet career at 18, and the one-woman band now known as Oh Land was born. Crafting what she calls electro-pop "fairy tales" on her first full-length, self-titled album in America, which dropped last spring, Oh Land blends an infectious mix of gurgling synths, tinkling xylophone, and ethereal vocals that pulses with energy and is pure dance-floor bliss. "I play everything — glockenspiel, electric drums, piano — and I'm very good on a recorder, grade-school style," she says. "Which isn't so rock 'n' roll!"

Just as buzz-worthy are her quirky concerts, referred to as "Mary Poppins on acid," where gilding her body in gold or prancing around a stage packed with balloons covered in her image is the norm. "Even my first show as Oh Land in a tiny, shitty bar, I had dancers who were painted blue and a stage covered in flowers and bubbles, and I threw glitter," she says. "People were like, 'What the hell is going on?'"

Theatrics and glitter bombs aside, her killer style ("French bookworm meets circus horse," she explains) and icy beauty have stolen the hearts of the fashion set. "I love everything visual — art, cinema, nature, and clothes," says Oh Land, who lists Marni, Miu Miu, and Acne as her fave designers. "When I wake up, I look forward to wearing my fluffy gloves or pink Stine Goya hat or whatever it is that day," she says. Still, Oh Land balks at being named fashion's latest muse: "I don't notice the attention," she laughs. "But I have noticed that the girls in my audience are always very well-dressed. And my bandmates — the two guys I tour with — are excited about that!"