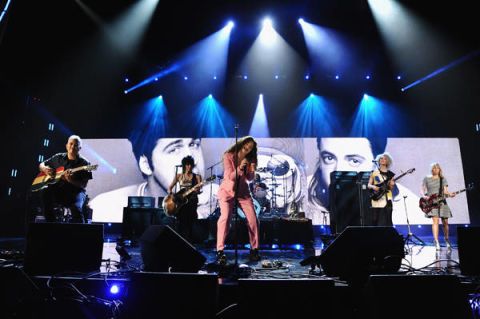 This year's Rock and Roll Hall of Fame Induction paid epic tribute to Nirvana, and the band's late frontman Kurt Cobain, by bringing together artists from the old and new guard.

In addition to the surviving members of Nirvana, Dave Grohl and Krist Novoselic, Lorde, Joan Jett, Kim Gordon, and St. Vincent's Annie Clark took the stage, each putting their own spin on a Nirvana classic. Lorde, the youngest performer by far and away, impressed in a bubblegum-pink suit and sports bra ensemble and covered the band's 1993 anthem "All Apologies," belting it out with every ounce of her signature teen spirit angst. Very Cobain, indeed.

It's fitting that a troupe of rock 'n' roll's female heavyhitters paid homage to Cobain, who had a feminist agenda throughout his career, denouncing sexism in his ideals, song lyrics, and public interviews.

The event, which also celebrated fellow inductees Kiss, Hall and Oates, Cat Stevens, and more, will air on HBO on May 31. Watch Lorde's performance, below:

This content is imported from YouTube. You may be able to find the same content in another format, or you may be able to find more information, at their web site.
Lauren Valenti Associate Web Editor I’m the associate web editor at Marie Claire.
This content is created and maintained by a third party, and imported onto this page to help users provide their email addresses. You may be able to find more information about this and similar content at piano.io
Advertisement - Continue Reading Below
More From Music
Princess Diana's Butler Talks 'The Crown'
Reese & Ryan's Son, Deacon, Drops His First Single
Advertisement - Continue Reading Below
Life Advice From an Icon, Cher
J.Lo Is Basically Naked on Her New Single Cover
Karaoke Songs Anyone (Yes, Anyone) Can Rock
Um, This Dude Claims Lady Gaga Stole “Shallow”
Sad Taylor Swift Is the Best Taylor Swift
Jennifer Lopez's NYC Concert Was Evacuated
Miley Cyrus Channels Britney Spears' Iconic Look
Ginger Spice Apologizes for Leaving Spice Girls