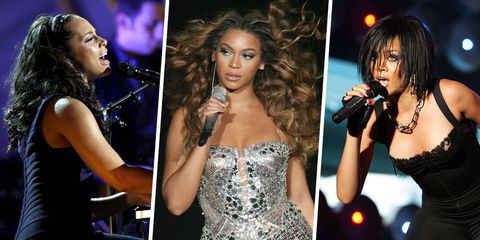 The year was 2007. You were the proud new owner of your very first iPhone. Hillary Clinton was a hopeful new presidential candidate. And these songs were blasting non-stop on the radio. Here, a reminder of what life was like 10 years ago, by way of its biggest hits.

If you spell "glamorous" correctly, you owe it all to this song. The track was actually recorded for Fergie's debut solo album, which feels like it came out yesterday. (FYI, The Dutchess is releasing her comeback album sometime this year.)

It might be a decade old, but Rihanna's "Umbrella" will never stop being iconic.

Ahhhh, the Soulja Boy. You can do it in the car, in the shower, at weddings, at the club, while making dinner...the list goes on and on. And while many dance fads have followed, nothing can touch this one.

"Gimme More" was the lead single on Britney's fifth studio album Blackout, and literally no one was not obsessed.

Sean Kingston exploded onto the music scene when he released "Beautiful Girls" as his debut single. Though it should be noted: the lyrics "you had me suicidal" were censored to "you got me in denial" 99% of the time.

"Buy U A Drink" most definitely gave a new generation of creepy men pick-up line fodder (ugh), but this track is just as good 10 years later.

Hands up if you spent 2007 blasting this song while getting ready to go to the club. Or, you know, eating pizza in your room with friends. Either way.

We are welling to bet significant (imaginary) money that you remember ever single word to this pop anthem.

Yes, Apple Bottom Jeans and boots with the fur used to be a thing. This song also sparked about a billion memes, which are still just as funny today as they were then. (See?)

11 "Beautiful Liar" by Beyoncé and Shakira

12 "I Don't Wanna Be In Love" by Good Charlotte

This song had everyone dancing back in 2007. And if you turn the volume up juuust loud enough now, it'll have the same effect.

You know those songs that instantly make you feel overcome with emotion? This is one of them. BRB, have some people to apologize to.

Before Nick Jonas went solo, he was in a very PG-rated band with his brothers, Joe and Kevin. This is also about a year before Joe broke up with Taylor Swift over the phone in 27 seconds. Never forget.

If you need any sort of reminder of just how talented Amy Winehouse was, this is it. And fun fact: Since Amy couldn't make the music video shoot, Mark found a few lookalikes to replace her.

You first heard this song one of two ways: 1) From the millions of times it was played on the radio, or 2) From Daft Hands, otherwise known as that super-cool finger dance that went viral on YouTube.

Tehrene Firman Web Editor When she’s not keeping up with the latest health news, Tehrene is probably doing one of the following things: walking her fluffy little dog, Trixie, blogging about food and fitness at TehreneFirman.com, watching Law & Order: SVU, or getting her sweat on in Pilates or spinning.
This content is created and maintained by a third party, and imported onto this page to help users provide their email addresses. You may be able to find more information about this and similar content at piano.io
Advertisement - Continue Reading Below
More From Best Songs of All Time
Beach Music to Get You Excited for Warmer Weather
Listen to the Best New Love Songs of 2021 (So Far)
Advertisement - Continue Reading Below
Listen to These New Sad Songs for a Good Cry
T. Swift, MGK & More Artists Giving Us the Feels
Your Ultimate New Year's Eve Playlist
Listen to These Sad Songs If You Need a Good Cry
Behold: A Sex Playlist That Won't Make You Cringe
The Ultimate Halloween Party Playlist
The Best New Music of 2020 (So Far)
The Music We're Dancing to This Summer