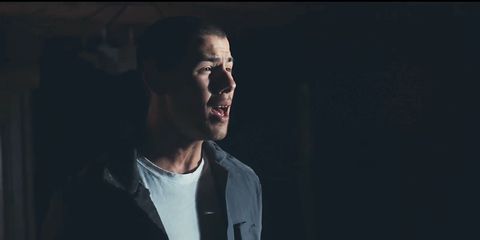 About a year ago, Nick Jonas broke up with his girlfriend, former Miss USA Olivia Culpo. Now, he has an album called Last Year Was Complicated, which is a not-so-subtle reference to the relationship. And the video for his new single, "Chainsaw," is a raw breakup ballad that shows how he may have been feeling at the relationship's end.

Portuguese model Sara Sampaio plays Jonas's love interest in the clip. We see flashes of the couple's good memories, and then a big fight, interspersed with clips of Jonas drinking and destroying things in his house out of anger. And then, as the song hits its crescendo, we see that the couple's house is on fire, and Jonas is outside it pouring his heart out. The visuals are a literal interpretation of the lyrics, which include "I'll burn everything that binds us/Take a lighter to the mattress you left, oh no."

"This was the first video we shot for the album and the closest to my heart," Jonas wrote on Twitter. He also shared a behind-the-scenes clip of his production team working on the song.

A video from nearly a year ago up in Mammoth, CA just as we finished writing CHAINSAW. Amazing memory that I'm so glad is on camera. Thank you @nlambroza @imjmichaels @spidermelk @seandouglas for being such incredible collaborators so grateful for you guys... And @jonathanmtucker for filming this epic video. #chainsaw #lywc

Jonas said in a Reddit AMA that "Chainsaw" is an especially important song to him. "I think the song 'Chainsaw,' people will see is incredibly vulnerable and personal. It's about walking back to the house you shared a lot of memories in with somebody," he wrote. "I think that everyone has something in their life that they need to let go of, and 'Chainsaw' represents that way of letting go. And it's actually been helpful for me, and hopefully will be helpful for other people."

Watch the full video for "Chainsaw" below: