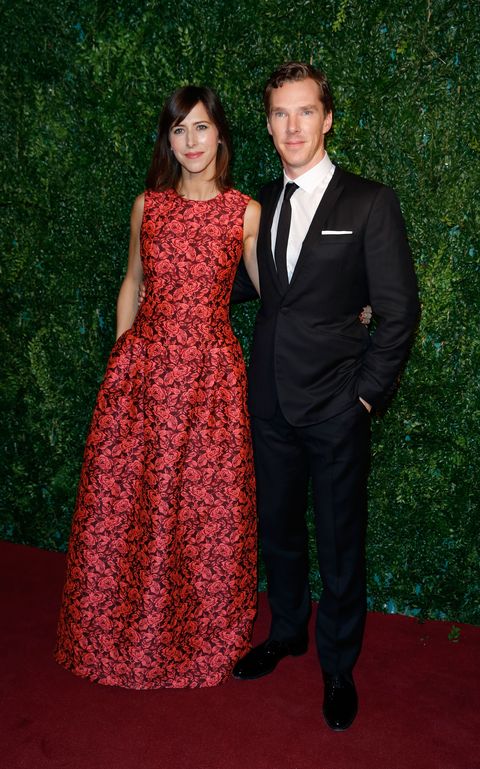 Update, 6/13: Benedict Cumberbatch and wife Sophie Hunter have added a Cumberbaby to their family—and it's a boy, reports People.

"Benedict Cumberbatch and Sophie Hunter are delighted to announce the arrival of their beautiful son," his rep confirmed in a statement. "We would kindly ask everyone to respect the family's privacy during these next few precious weeks."

Original story, 2/14: Oh it hurts—it hurts so bad. Man of our dreams Benedict Cumberbatch has officially tied the knot with fiancée Sophie Hunter in an intimate ceremony on the Isle of Wight today, The Telegraph reports. And we guess we have to forgive him for breaking our hearts—on Valentine's Day, no less—because the whole thing is just so sweet.

Cumberbatch and Hunter have been engaged since November, and are expecting their first baby this year. It's difficult to admit this, but if there's anyone worthy of taking our beloved Benedict off the market, it's her: She studied Italian and French at Oxford before becoming an actress and theater director. So...we guess she'll do.

Today's ceremony was private, but according to a source in The Telegraph, the bride's hair was "neat," the guests erupted in a cheer when the couple kissed, and the newlyweds rode off in a classic Jag. Not bad for a V-Day.

4 Things No One Ever Told Me About Married Sex

Jessica Pels Editor-in-Chief As the editor of Cosmopolitan, Jess oversees the editorial for all of Cosmo's efforts across print, digital, video, and emerging platforms.
This content is created and maintained by a third party, and imported onto this page to help users provide their email addresses. You may be able to find more information about this and similar content at piano.io
Advertisement - Continue Reading Below
More From Celebrity
Iconic Party Photos From the Past
The Best TV and Movie Wedding Dresses of All Time
Advertisement - Continue Reading Below
40 Celebrity Sisters Who Look So Much Alike
40 Rare Photos of Grace Kelly Through the Years
A Look at Royal Family Portraits Through the Years
The 50 Most Popular Episodes of ‘Friends,’ Ranked