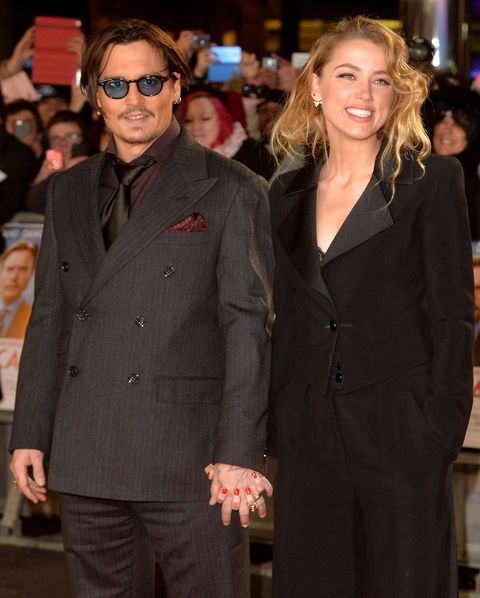 Update, 2/9: Those crazy kids did it! Amber Heard and Johnny Depp got hitched (for the second time, kinda) Sunday, People reports.

After the couple was legally married at their Los Angeles home Tuesday, they moved the party to Depp's private island in the Bahamas, where they seemingly held another ceremony with 24 of their closest friends. The reception, located on another part of the island, involved a long table you might describe as "communal" or nightmarish, depending on your dining experiences, and the water, judging by the lone overhead shot, was clear and turquoise-colored.

Congratulations to Johnny and Amber—may your tables always be long and full of friends.

Original post, 2/4: After a yearlong engagement, Johnny Depp is "completely in love and can't wait" to make an honest woman out of Amber Heard this weekend, E! News reports.

They'll likely tie the knot on Little Hall's Pond Cay, Depp's 45-acre private island in the Caribbean, which has six beaches named after people like his children, his former partner Vanessa Paradis, and Hunter S. Thompson. (A wedding venue called Gonzo—we like it.)

"I don't think I'd ever seen any place so pure and beautiful," Depp once said of his tropical getaway." You can feel your pulse rate drop about 20 beats. It's instant freedom."

No word on if they'll sail off into the sunset on Johnny's pirate-themed, 156-foot-long steamboat, but it sounds like just the sort of thing Mr. and Mrs. Depp would do. Best wishes!

Watch Gwyneth Paltrow and Johnny Depp Play "Never Have I Ever"

So This Happened Last Night: Saint Johnny Depp May Be Engaged

Celebrity Couples We Will Miss Forever