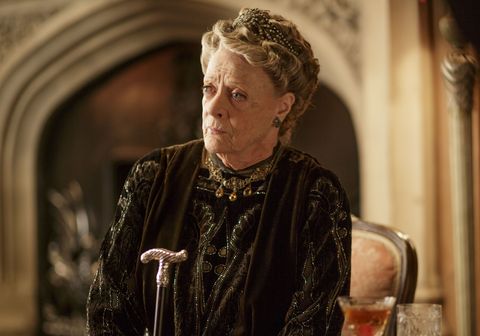 Maggie Smith, you better be messin' with us. The actress, who plays Violet Crawley on Downton Abbey AKA the top OG and Dowager Countess of Grantham, says that season six might be her last season.

Doesn't she know she's one of our favorite characters on the show? Writers, you better brainstorm a way to resolve this, and quick. Maybe a flashback season? Maybe Violet Crawley is actually a wizard and can time travel? Let's think about this some more, shall we?

The sixth season goes into production this year and will premiere 2016, so make sure you get your Lady Violet fix now.

Update 3/3: You guys, Maggie Smith may be staying a little while longer after all. According to the Associated Press, a spokesperson for Milk Publicity has stated that Smith has always been vocal about staying on "for as long as the show runs." All we can say is: Thank goodness.

'Downton Abbey' Star Joanne Froggatt Takes Us Behind the Scenes

Samantha Leal Senior Web Editor I'm Sam, the senior editor at MarieClaire.com.
This content is created and maintained by a third party, and imported onto this page to help users provide their email addresses. You may be able to find more information about this and similar content at piano.io
Advertisement - Continue Reading Below
More From Celebrity
Katie Holmes' Mango Puffer Coat is a Winter Staple
Kate Rewore Her Favorite Festive Tartan Dress
Advertisement - Continue Reading Below
Kate and Charlotte Hunt for Spiders Together
Princess Diana's Nieces Opened Up About Their Aunt
Elizabeth Hurley, 55, Shows Off Toned Abs On Insta
Keira Knightley Won't Do Nude Scenes Filmed by Men
Kourtney Kardashian Is Dating Travis Barker
Priyanka Chopra Jonas Talks Her New Memoir
Priyanka and Nick on Their Quarantine Quality Time
Priyanka Pulls Back the Curtain