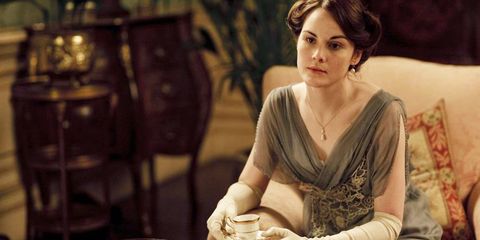 Update, 9/15: The end is nearing, and it's mercifully nowhere as weepy as this first first look at the final season of Downton Abbey. (The music, man—low blow.)

Released Monday, the latest teasers take a more optimistic/scandalous look at the future of that great estate and its occupants, featuring galloping horses, sweeping shots of the soon-to-be-sold-off (?) hunting grounds and Mary's "Who the F is that?" face when a mysterious maid shows up on her front door and Anna has to haul her away. She doesn't look old enough to be Mary's real mother, but you know how casting—and Lord Grantham—can be.

Watch both clips below, and just quietly endure the chest pains—your doctor can't prescribe anything for that.

Update, 9/9: Next to a disclaimer refusing responsibility for broken hearts/bouts of hysteria due to plot lines not wrapping up to one's liking, the Downton Abbey people should put one up that says "All sexual tension between in-laws unintentional." Because according to Michelle Dockery, Mary/Branson ain't ever going to happen.

"Absolutely not!" she said in an interview with Digital Spy. "We need to get rid of that rumor, he is very much her brother and always will be."

More room for Matthew Goode's dashing Henry Talbot, amirite? Too bad Docks had to semi-quash that one too, explaining that this year, Lady Mary's going to focus on herself instead of any stupid boys—just as her austere Valentino gown from one of the last DA red carpets ever said she would.

There is one bright-ish spot, however: Digital Spy confirmed Tom and Sybbie will be home for Christmas and the series finale so she can call Lord Grantham "Donk" one last time. Aaannddd...here come the feels.

Update, 6/8: We're back, guys, and slightly calmer than before re: Downton Abbey leaving our lives forever after its sixth season. The Violet Crawley spinoff, the possibility of a full-length movie, and the super-sweet endings the actors imagined for their characters kind of helped, but nothing eases the pain of a slow, post-DA death as much knowing that Julian Fellowes hasn't even written the finale yet. Anything could happen!

At a Q&A with a few cast members and producers of the show Saturday at the Writers Guild, Fellowes was asked if the cast had seen the series finale, to which he replied, "I haven't written the finale yet." That doesn't mean he's got his hit list prepared, though: He reiterated that Sybil and Matthew's deaths were prompted by Jessica Brown Findlay and Dan Stevens's wanting to leave and that "we don't sit at our desks plotting how to kill characters," Variety reports.

Oh, and here he is on writing in a suitor for the Dowager Countess: "I enjoy love and I like the idea that everyone has an emotional life, whether successful or not. I like older characters to have emotional lives. In Movieland, women's sex lives end at 30, men go on to 78." Yeah! Take that, last f*ckable day.

Update, 3/20: TVLine reports that multiple sources (how could you people) confirm the worst: The upcoming season of Downton Abbey will be the last. No more Granny Violet. No more Lady Mary. No more—oh god, keep it together—Carson.

The reasoning does make sense, from a real-world perspective: The cast's contracts expire after next season, and re-negotiating at this point would likely be a nightmare.

BUT WHO CARES ABOUT THE REAL WORLD. DOWNTON FOR LIFE.

The Mirror reports the writer is jumping ship after the sixth season to work on the NBC drama The Gilded Age, an Edith Wharton-y-sounding show set in 19th-century New York. Apparently, some of the principal actors on DA caught wind of this, so they/their agents have been out pounding the pavement in search of new work.

"Some are interested in the U.S., where Downton is as popular as it is in the U.K.," said an unnamed source who must have seen E!'s two SAG Awards segments on British actors taking over Hollywood.

Fine, Julian. Leave. Anyway, they say if you love something, you should let it go. *starts Change.org petition*