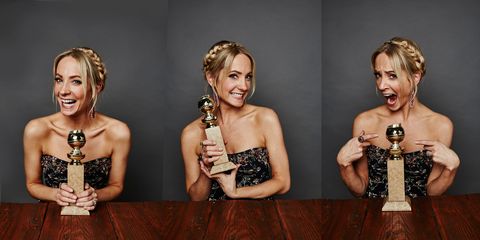 I will bet my paycheck (okay maybe just $5) that you have fantasized about setting foot in Downton Abbey's famed Highclere Castle, the gorgeous real-life estate—with real people still living in it—that the show is built around. Or maybe you've dreamt about wearing the amazing clothes, or about hearing the prim-and-proper cast let it fly when the cameras aren't rolling.

It's because Downton Abbey, with all its visual richness and dramatic plot lines and across-the-pond allure, is one of the most mythic shows of our time. Fans cannot get enough. I know because I am one of you.

So what is it like behind the scenes? On a recent Friday afternoon, I chatted with British star Joanne Froggatt, who plays beloved lady's maid Anna Bates, to find out. She's one of my favorite characters on the show—pure of heart but always finding herself in the thick of the action—and has sprung to the foreground with impressive performance after impressive performance. Last season her character endured a brutal rape, and Froggatt's portrayal of the stunned, pained, complex fallout earned her a Golden Globe at this year's awards. "Playing this role brought it home to me that this sort of thing happens—a lot," she says of the timely plot point, which has resonated deeply with fans. "I received so many letters from women sharing their own experiences."

Sparing you any spoilers, Froggatt's season 5 storyline manages to be its most gripping yet. And as someone who personifies the trusted eyes and ears of Downton, who better to give us the inside scoop?

Here's what she told me:

Actually, lots of what you see is a replica
"Our design team is incredible. Just so good it's mind-blowing. There's a fire at the beginning of season 5 at the house, but because of the risk of smoke damage, they had to build a set of Edith's bedroom where the fire was and the corridor outside. It was so strange shooting those scenes because it was exactly like Highclere. I forgot I wasn't there! It was weird."

They're wearing authentic undergarments under those dresses
"In the first few seasons, we had to wear corsets under our dresses to get the correct shape under the clothing. Putting the corset on makes you feel very different—it helped me get into character."

Hair and makeup is pretty unforgiving for the downstairs crowd
"I don't really wear any makeup on the show—foundation and that's it. No mascara. In my real life, I would never, ever leave the house without mascara. I don't go to the gym without mascara. Sometimes they do give me a tiny little bit of blush though—we had to add some during a scene where I was sleeping because I'm very pale and they were worried I looked dead!"

Not even the cast knows if this will be the last season
"There are always rumors! The truth is we have no idea—we're just taking it season by season now. We started with a three-season deal, then we got asked to do another two, then one more, and now we're just going to see how it goes."

The season finale of Downton Abbey airs on Sunday, March 1 at 9 p.m. EST on PBS. Wanna watch together?

Jessica Pels Editor-in-Chief As the editor of Cosmopolitan, Jess oversees the editorial for all of Cosmo's efforts across print, digital, video, and emerging platforms.
Advertisement - Continue Reading Below
More From Culture
The Best Wedding Movies of All Time
Read 'Anna K' Even If You Didn't Read the Original
Advertisement - Continue Reading Below
19 Most Underrated Films of All Time
The Music Podcasts We Keep Pressing Play On
Why You Keep Seeing "Until Tomorrow" on Instagram
The 19 Best Murder Mystery Movies
How to Join Marie Claire's Online Book Club
'In Five Years' Is MC's April Book Club Pick
'Little Fires Everywhere' Is a '90s Time Capsule
How Murtagh Dies in the Outlander Books