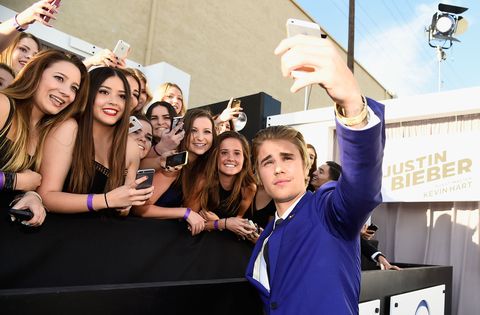 Karl Lagerfeld, jewel in the crown of humanity, recently told The New York Times he hates it when plebeians sidle up to him and dare to use their front-facing cameras near his person.

"I don't do selfies," he said. "But other people do, and they all want to do selfies with me. No, no, no. Thank God, Sébastien, my assistant, he's mean to the people in the street, mean and rude. I'm a nice person."

Well, just because your job depends on pleasing the masses doesn't mean you have to like them, I guess. Here, we've compiled a shortlist of celebrities who've refused to take selfies in the past, just so you know which ones to admire from afar—or perhaps with a nice tweet.

Biebs just looooves to spit the truth these days. First, he spilled the beans about why his and Selena Gomez's relationship fell apart, and now, he's revealing how much he hates taking photos with screamingg fans—via Snapchat, of course. "If I'm walking somewhere or arriving somewhere and you guys are asking to take a photo...if I don't respond, if I continue just walking, the likelihood is I don't want to take a photo at that moment." Duly noted.

Lies, Karl! LIES! Unless Kendall's pretending to take one using a stunt phone and doing this for an ad campaign is somehow not appalling to Karl, in which case, you do you, buddy.

Her face is just like, "Are you kidding me with this right now."

Lil Jon always tells the truth. In this case, it is that he doesn't care to share a screen with a YouTuber. (FYI, iJustine's caption was, "That time when Lil Jon wouldn't take a selfie with you, but took photos with everyone else around you 😂😂😂 dying. I was told to turn down #irony.")

To be fair, she'll be nice about it when she basically tells you to go away.

Poutiest for last! Maybe he's thinking about how the Super Bowl, too, is like an ex-girlfriend.

Chelsea Peng I'm Chelsea Peng, the assistant editor at MarieClaire.com.
This content is created and maintained by a third party, and imported onto this page to help users provide their email addresses. You may be able to find more information about this and similar content at piano.io
Advertisement - Continue Reading Below
More From Celebrity
Beyoncé Wore Tweed Micro Shorts for Date Night
Prince Charles Addresses Prince Philip's Death
Advertisement - Continue Reading Below
Prince William Pulls Out of 2021 BAFTA Appearances
J.Lo Wears a Crop Top and Gold Joggers on Set
Prince Philip Said He Had No Desire to Live to 100
JT Is in the Throwback Pic Britney Posted on IG
The Queen Was by Prince Philip's Side When He Died
Prince Harry Is "Really Upset" Over Philip's Death
Will Harry & Meg Attend Prince Philip's Funeral?
The Queen Is Hopeful Prince Harry Will Return Home