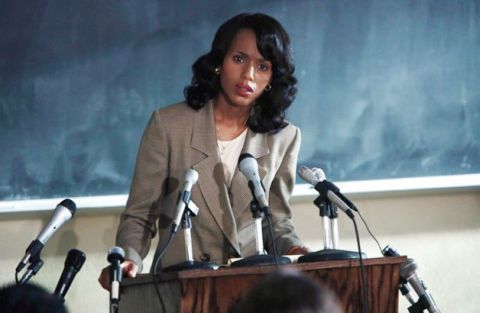 Update, 6/16: Are you ready? The first look at Confirmation—the HBO film about Anita Hill and Clarence Thomas—is here, thanks to, well, HBO, and Washington herself. And can we just say, we're SO EXCITED.

Dear @HBO, Thank you for the profound opportunity of getting to inhabit Anita Hill and help tell this story! Yours Truly, K-Dub (aka super excited Exec Producer) #Confirmation

Original story, 3/15: Gloria Steinem. Billy Jean King. Female superheroes! Certain members of Hollywood are realizing that real-life women are just as worthy of their own movies/shows as Chevy-alien hybrids and potty-mouthed stuffed animals, and all we can say to that is, "At last!"

According to the Hollywood Reporter,our cover girl Kerry Washington will play Anita Hill in an HBO movie titled Confirmation. Hill, who is today a professor at Brandeis University, accused Clarence Thomas of sexual harassment in 1991 while he was being considered for the Supreme Court and, in the process, ignited a national discussion of victim's rights, sexism, and race relations.

Susannnah Grant, who received an Oscar nomination for Erin Brokovich, will write the screenplay, while Washington will also executive produce. There's no release date yet, but two things are certain: 1) Filming won't interfere with Scandal, and 2) We are so watching this.

Marisa Tomei Will Play Gloria Steinem in a New Miniseries, Because the World Is Amazing

A Documentary About Delhi's Brutal Bus Rape Gets Banned in India, BBC Releases It Anyway