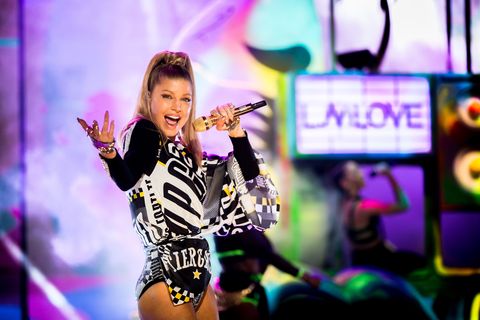 1. Would always: Spray perfume on the nape of my neck, wrists, and hair, then do a final walk-through before I exit the door. Would never: Put on two fragrances at the same time. One boyfriend told me I smelled like a whorehouse.

2. Picky about: [My son] Axl's bibs. I found this company called Bibbybubby that makes them in prints like camo and plaid. Not so much about: Where I go on date nights [with husband Josh Duhamel], whether it's the movies or a dive bar or Nobu Malibu.

3. I feel for: The homeless and the less fortunate. No sympathy: Backstabbers.

4. Early for: Nothing. Late for: Church.

5. Getting better at: Saying "no" to things. We can have it all, just not all at once. Getting worse at: Putting things back in their place. I don't have the time.

6. Totally get the appeal: Binge-watching Sons of Anarchy, Scandal, Ray Donovan, Nurse Jackie, The Wire, Breaking Bad, Lost—I could go on and on. Don't get at all: Texting at a group dinner.

7. Moment of triumph: Singing for more than a million people in Ipanema Beach on New Year's Eve in 2006. Epic fail: I tried to make my mom's lasagna in a contest with Josh. I didn't cook it long enough, so it was really soggy.

9. Farthest vacation: Maldives for my honeymoon. Nearest: My house! Staycation.

10. Would try once: Hot-air ballooning. No, thanks: Shark-cage diving.

11. Career highlights: Opening for bands like the Rolling Stones, U2, the Police, and Metallica—I remember going to see them in high school. Low point: When I was in Wild Orchid at a fair performance in 1998 and only five people showed up.

12. Subject I won't shut up about lately: My next album, due out later this year. I'm so excited to be making the album that I'm supposed to make. Subject I avoid: Getting back to holiday texts.

14. Worth the wait: Chocolate and Grand Marnier soufflés. Wherever they say it will take 45 minutes or an hour, I always stay and wait. No patience for: When people's actions don't back up their words.

Fergie Joins the Fight to End Violence Against Women

Miley Cyrus Told Off a Sexist Paparazzo, Regrets Dressing Like a Hippie, and Is a Conspiracy Theory Buff

This content is created and maintained by a third party, and imported onto this page to help users provide their email addresses. You may be able to find more information about this and similar content at piano.io
Advertisement - Continue Reading Below
More From Celebrity
Rihanna Takes Out the Trash on Trump's Last Day
Chrissy Teigen Shared a Moving Post About Sobriety
Advertisement - Continue Reading Below
Meghan's Royal Aides to Testify in Her Court Case
Greta Thunberg Hilariously Trolled Trump—Again
Watch Demi Perform During Biden's Inauguration
Joe Biden Follows Chrissy Teigen on Twitter
J.Lo Wore Head-to-Toe Chanel for the Inauguration
The Queen Sent a Private Message to Joe Biden
Lady Gaga's PDA with Boyfriend Michael Polansky
Twitter Reacts to Lady Gaga at the Inauguration