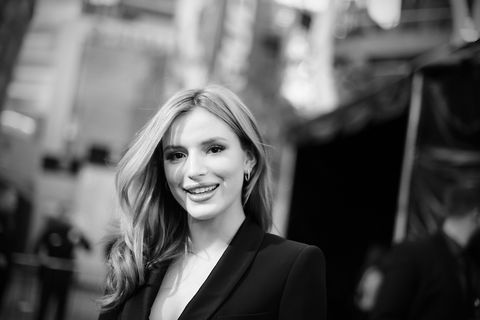 Bella Thorne has come a long way since her Disney beginnings. The redhead—who is by now a mainstay on Fashion Week front rows—has designed clothing, is working on the third book in her YA trilogy, has released a slew of successful pop music, has just finished promoting her newest movie The DUFF, and has now signed on to star in a new ABC Family series. In other words, she's taking over the world and she's only 17.

Here, a look inside the life of the teen multi-hyphenate, and where she's going next.

It was just announced that you've been signed on for the TV adaptation of young adult novel Famous in Love for ABC Family— from the same creator/producer as Pretty Little Liars, Marlene King. What can we expect?

"I had read the book and I loved the book—it's about this girl who goes to a regular school, UCLA, and she's basically plucked from obscurity to be in the next, you know, Twilight saga-type series. She's trying to handle the media and deal with this new crazy life and she's also pulled between two love interests. When I heard Marlene King was attached, I knew it would be crazy good."

You're a YA author yourself—what's the message of your trilogy Autumn Falls?

"You know, and I hope this doesn't come off wrong because I've tried to explain this to people before, but it's just about knowing that in your life, you have to be yourself and know that life is the way it is for a reason. You can't waste your time trying to be perfect because it's going to backfire. You have to trust yourself. That's really what the book is about."

It's in the YA genre, but as we know, the genre has attracted more and more adult readers. Who were you writing for?

Do you hope your series goes the Hunger Games/Divergent route—as in, do you want to see it as a movie?

"I've actually been approached by two studios, and we'll see. I would definitely be excited to see that happen."

You've come out with a line of Quinceañera dresses, you wrote a book, you're an actress, you're a singer—what's something that's on your list that you haven't done yet?

"I definitely want to study directing and film writing. That's on my list."

Would you want to direct Autumn Falls, the movie?

"[laughs] No, not yet. I'm not ready for that yet. Honestly, I know I have to direct a couple probably shitty films before I make a decent one. I want to really learn everything I can before I even get behind the camera."

You recently starred in The DUFF, a movie about teen popularity, and you play the mean girl. Do you like playing those types of characters? Are they more fun?

"It was fun, but I'm actually trying to steer away from those types of roles now. I definitely want to do something different."

What would be your dream role to play?

"I'm not really sure. I don't think I would know what I want until I see it. When I read a script, I fall in love with it, and it all depends on that. But I'd love to do something more indie or grungier. A part I just read for had a character who lives in a trailer park, who grows and reacts and is different than anything I've ever played, and that would be really cool."

Samantha Leal Senior Web Editor I'm Sam, the senior editor at MarieClaire.com.
Advertisement - Continue Reading Below
More From Celebrity
Kate Middleton & Michelle Obama Use This $64 Cream
A Full Timeline of Tyler C. & Hannah B.
Advertisement - Continue Reading Below
Blake and Ryan Donate $400K to NY Hospitals
Prince William May Work as an Air Ambulance Pilot
Harry Is Likely to Get U.S. Diplomatic Status
Harry Was Forced to Give Up His Military Titles
Ariana Grande Revealed Her Natural Curls
Fans Love This Accident Meme of Queen Elizabeth
Kate and Will Are Symbolically Leading Monarchy
Meghan & Harry Posted Their Last Sussex Instagram