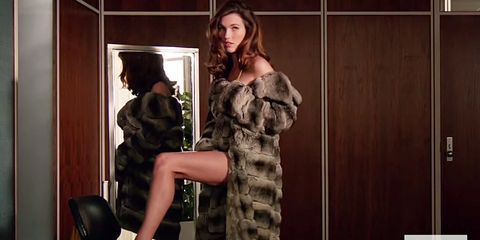 The mid-season premiere of the seventh season of Mad Men on Sunday started with a shot of a beautiful young women sensually showing off her legs to Don Draper while clad in nothing but a $15,000 chinchilla coat, in what subsequently turned out to be an audition for a razor blade commercial...(Always a tease Mad Men, always a tease.)

If her face seems oddly familiar, it might be because she was Miss Golden Globe 2012. Or it might because she, Rainey Qualley, is actually the daughter of Andie MacDowell of Four Weddings and a Funeral fame.

While we've only seen a little bit of her acting chomps so far, but if we had to guess, we'll probably see more of Rainey soon enough. After all, the Talent Gene is a real thing in Hollywood.

Every Amazing Song That's Ever Blow Your Mind on 'Mad Men'

The Best Looks from the Last-Ever 'Mad Men' Press Tour