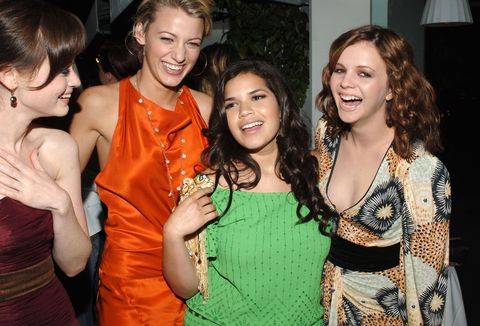 Update, 4/12: Hey, it's gotta be pretty cool to be such a hot-commodity baby that famous people are fighting over who gets to godparent you. Which seems to be the case with Blake Lively's daughter James—Amber Tamblyn said earlier this week it's "a fact" that she and her Traveling Pants costars are the baby's godmothers, but Lively has come forward to set the record straight. "I never named them my godmothers," she told E!. "They're my dear friends. I would say my baby has a lot of fairy godmothers."

Actually, we think this is a promotion, all things considered.

Original post, 4/10: People give Blake Lively a hard time for treating life like it's one big Pinterest board called "Homey, Picturesque, Glamorous Perfection Inspo!," but she seems like a sweet lady who just wants everything around her to be pleasant and pretty. So, because she also understands Hollywood and the public are super into pageantry and fiction-fact crossovers, she's gone and anointed her three Sisterhood of the Traveling Pants costars godmothers to her baby girl.

And Nick Lachey broke the news.

"You're still very close with your...costars and the three of you are godmothers to Blake Lively's baby—is that a fact?" unexpectedly hard-hitting journalist Lachey asked Amber Tamblyn during an appearance on VH1's Morning Buzz Live. "Yes, that is a fact," she confirmed, sending SOTTP fangirls everywhere into a collective tizzy.

All kidding aside, it is really very sweet they're this close IRL and have seemingly regular reunions that might now include potty-training/life-advice-giving sessions.

Go America! Supporting our girl in her play, Lips Together, Teeth Apart. #sisterhood

Sisterhood of the traveling Pinot.

Ryan Reynolds TOLD You His Baby's Name, but You Wouldn't Listen