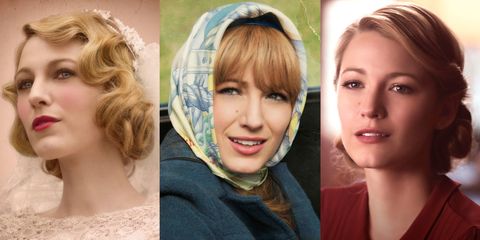 In her new film Age of Adaline, Blake Lively finds herself living nearly eight decades without aging a single day (or an ounce of La Mer).

By some mysterious force of nature, her character Adaline Bowman survives a freak accident and becomes immortal, remaining 29-years-old from the early 1900's to present day.

Some may hail it a curse—as it seems to be, if the film's trailer is any indication—but we can't help but view it as an opportunity to paint the town red in each decade while sporting the most glamorous fashion and beauty of the time.

Proving that each era is more swoon-worthy than the last, the film has released a series of dogeared images that depict Lively in each decade, from a blushing '30s bride to the girl next door in 2015.

Here, we bask in the evolution of the costumes (many of which were designed by Gucci), hairstyles, and makeup as Adaline sails through time.

Daisy Buchanan, eat your heart out. Adaline is a modern (and lavish!) lady of the Roaring Twenties donning a ribbon cloche hat, ruffled drop-waist dress, and a paisley-lined statement coat. She wears her hair in the cropped style du jour: a curly, pinned bob.

In the early '30s, she's a bride bedecked in a lacey, long-sleeved wedding gown and a lovely tulle veil decorated in white flowers. Her coif is styled into a wavy faux bob, while she sports a bright pink pout and matching cheeks.

Adaline toes the '40s line between ladylike and vamp, wearing a siren red V-neck blouse and a strand of pearls. Bearing a striking resemblance to the Hollywood stars of the time, her blonde hair is curled to perfection and lips are painted bright red.

In the mid-'50s, she's polished and ladylike, wearing a green overcoat and a print neckerchief tied delicately around her neck. Without a hair out of place, she channels Marilyn Monroe thanks to her golden pin curls that fall just above the shoulders.

Ready to cruise the highway—top down, of course—she wears a cozy navy coat and print silk head scarf. Peaking out from the latter is some warm ginger fringe, which is styled beneath a blue headband.

Adaline is giving off distinct Ali MacGraw-in-Love-Story vibes wearing a cozy knit turtleneck with au naturale makeup. However, she bucks the long, wavy hair trend of the '70s and opts to keep it hers in a rolled-back updo.

Fortunately for Adaline's scrapbook, she seems to be totally disinterested in the more-is-more trend of the '80s. Instead she sports a hunter green jacket, black turtleneck, and gold costume earrings. Her long, curled hair is pinned back out of her face in retro fashion.

Even amidst the grunge of the '90s, the 29-year-old is the picture of sophistication. She opts for a beach ball-printed blouse, stripe-trimmed cardigan, and gold pendant. Again, her hair is pulled back out of her face, but in a slightly mussed-up 'do.

Today, Adaline is just as elegant, but in a more pared-down fashion wearing a crisp, wine-colored silk blouse. Her hair is still perfectly styled in a classic updo and her eyes are accented with long, curly lashes.

A History of Ryan Reynolds Gazing Lovingly at Blake Lively

Lauren Valenti Associate Web Editor I’m the associate web editor at Marie Claire.
Advertisement - Continue Reading Below
More From Beauty
The 3 Lipsticks I Have In Rotation Right Now
Why Using a Product With Peptides Is Worth It
Created for From Marie Claire for Created by Marie Claire for
StriVectin Peptight
Advertisement - Continue Reading Below
Line Edit: Eyeliner Trends That Are High Drama
Black-Owned Beauty Brands You Need to Know
The Body Lotion Your Dry Skin Has Been Craving
Know the Signs That Your Makeup Has Expired
Kendall Jenner Has Rapunzel Hair On 'Garage' Cover
WORTH IT: Royal Fern Skin Perfecting Essence
Blonde vs. Brunette: Celebs Who Made the Switch
My Top 3 Favorite Lipsticks Right Now