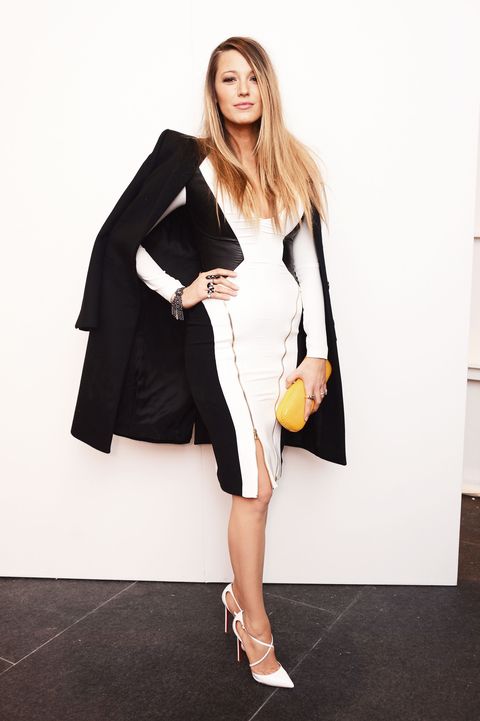 Blake Lively has made her first appearance since welcoming her daughter in December and aside from the fact that she looks unbelievable, we're basking in one cool detail: she still hasn't touched-up those roots.

The actress attended designer Gabriela Cadena's show during New York Fashion Week—she wore a black and white bodycon number paired with a sleek coat worn on the shoulders—and epitomized the beauty of a subtle ombré, a.k.a. sombré.

Many women let their roots grow during pregnancy as a safety precaution, but typically touch them up soon after giving birth. However, we had a sneaking suspicion that Lively wouldn't be so quick to run back to her colorist as she wears those lengthy dark roots with her golden blonde hair so well.

Ladies, take note, as one reason her grown-out look is so successful is that she utilizes one of our tried-and-true tricks for concealing roots in between appointments, and that's side-parting the hair. It musses things up a bit, which makes the severity of the roots less noticeable.

In the midst of contemplating letting our roots grow, Lively's blasé attitude towards keeping her dye job fresh is decidedly reassuring that we've got at least a week of two of leeway.

The Art Of Being Blake

6 Super Sneaky Ways to Hide Your Roots Between Appointments

Winter Static Is the Worst—Here's How to Beat It

Lauren Valenti Associate Web Editor I’m the associate web editor at Marie Claire.
Advertisement - Continue Reading Below
More From Beauty
Hailey Bieber's Beauty Routine Is So Simple
Facts to Know Before You Get a Keratin Treatment
Advertisement - Continue Reading Below
The 3 Lipsticks I Have In Rotation Right Now
Why Using a Product With Peptides Is Worth It
Created for From Marie Claire for Created by Marie Claire for
StriVectin Peptight
Line Edit: Eyeliner Trends That Are High Drama
Black-Owned Beauty Brands You Need to Know
The Body Lotion Your Dry Skin Has Been Craving
Know the Signs That Your Makeup Has Expired
Kendall Jenner Has Rapunzel Hair On 'Garage' Cover
WORTH IT: Royal Fern Skin Perfecting Essence