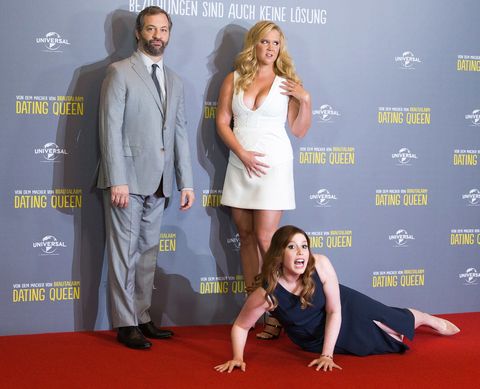 Update, 8/11: Amy Schumer isn't done with the joke *quite* yet. Nearly 4 months after she pranked Kanye West and Kim Kardashian West at the Time 100 Gala by pretending to fall in front of them on the red carpet, she was at it again. But this time, the tables were turned.

AsPeople reports, Trainwreck director Judd Apatow and co-star Vanessa Bayer filled in as Kanye and Schumer, respectively, while Schumer took the role of Kim Kardashian West. And, well, the photo speaks for itself.

Original story, 4/22: Amy Schumer, you beautiful soul, you. While at last night's gala to celebrate Time's 100 Most Influential People, the comedian played a prank on Kim and Kanye in the easiest, most juvenile way ever—by pretending to fall on the red carpet—for all the laughs. (Mostly from everyone else who was NOT Kimye, which made it even more hilarious.)

Three things to note about these photos:

Samantha Leal Senior Web Editor I'm Sam, the senior editor at MarieClaire.com.
This content is created and maintained by a third party, and imported onto this page to help users provide their email addresses. You may be able to find more information about this and similar content at piano.io
Advertisement - Continue Reading Below
More From Celebrity
Diana Had a Secret Message on Her Wedding Shoes
Will's Friends Made "Jibes" About Kate's Mom
Advertisement - Continue Reading Below
William Will Suffer "Worst" from Harry's Memoir
Simone's Boyfriend Sent Her the Sweetest Message
Harry's Friends Don't Want to Be in His Memoir
Will & Kate's Modern Approach to Raising George
Meet Simone Biles's Super Supportive Parents
What Happens on Katie's Season?
Bennifer Recreated Their 2002 PDA Moment
Why Harry's Memoir Release Date Has Upset People