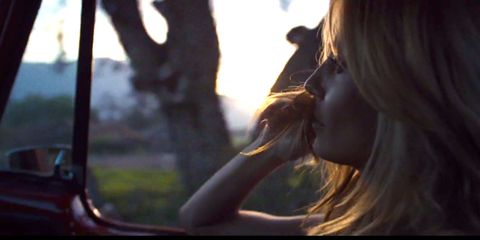 In the most un-Sia-like Sia music video yet (mostly because it doesn't star Maddie Ziegler for once), Heidi Klum and Game of Thrones's Pedro Pascal play a couple who, when they're not rolling around on a bed, a meadow, or in some sheer curtains, set things on fire and present each other with bloodstained rocks. Not bad for a guy who exited television via head smush?

The visuals for "Fire Meet Gasoline" follow Sia's video trilogy, the last of which featured Maddie Ziegler's head and a considerable amount of grimacing.

Watch the extended Heidi Klum Intimates commercial below, because with the product placement and the billowy-drape peekaboo and the chin-licking, that's what it really is.

You Are Not Seeing Things: Kristen Wiig DID Perform with Sia at the Grammys

Chelsea Peng I'm Chelsea Peng, the assistant editor at MarieClaire.com.
This content is created and maintained by a third party, and imported onto this page to help users provide their email addresses. You may be able to find more information about this and similar content at piano.io
Advertisement - Continue Reading Below
More From Celebrity
Zaya Wade Freaked Out Chatting With Michelle Obama
Harry & William Won't See Eye-to-Eye Any Time Soon
Advertisement - Continue Reading Below
Jennifer Lopez Stuns in a Little Black Mini Dress
Harry & Meghan Won't Throw the Queen Under the Bus
Harry & Meghan Have Nothing to Lose in Oprah Chat
How to Watch Meghan and Harry's Oprah Interview
Gigi Hadid Dyed Her Hair Red
How Celebrities and Friends Are Supporting Meghan
Meghan Didn't Need Prince Harry to Be Wealthy
Pregnant Emma Stone Runs Errands in Santa Monica