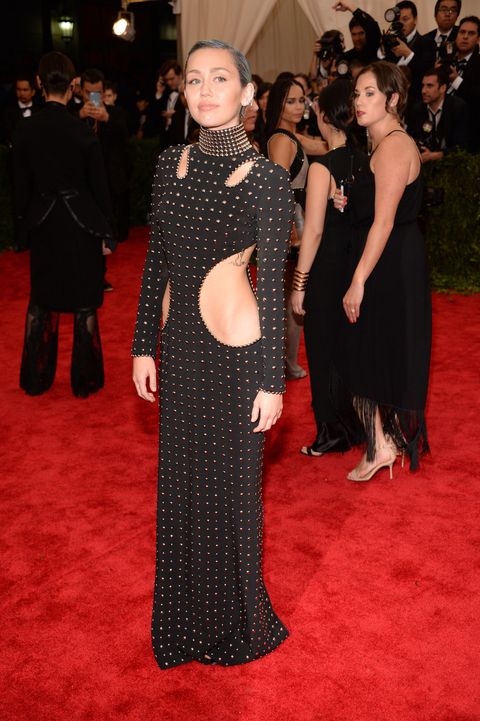 Update, 6/10: Miley's Paper magazine spread has been getting loads of attention, but the accompanying interview is where it's *really* at.

In addition to reiterating that she's "down with any adult—anyone over the age of 18 who is down to love me," the chanteuse recalls how she opened up about her sexuality to her mother at age 14.

"I remember telling her I admire women in a different way. And she asked me what that meant. And I said, I love them. I love them like I love boys," she said. "And it was so hard for her to understand. She didn't want me to be judged and she didn't want me to go to hell. But she believes in me more than she believes in any god. I just asked for her to accept me. And she has."

Update, 5/8: In an interview with TIME, the singer explains that she doesn't like to put herself in a box—she's not bi, lesbian, *or* straight.

"I'm not hiding my sexuality. For me, I don't want to label myself as anything," she says. "We love putting people in categories, but what I like sexually isn't going to label me as a person."

"There are times in my life where I've had boyfriends or girlfriends," she continues. "And there are times where I just love being with myself and don't want to give part of myself away to someone else."

Original post, 5/7: Say what you want about Miley Cyrus, but girl does what she wants—and proves, gloriously, that you don't have to conform. See: 1) Pushing the boundaries of costume and choreographic propriety 2) Using her armpits as art canvas/social statement 3) Exploring her sexuality.

In a new interview with the Associated Press, Cyrus admits that not all of her relationships have been "straight, heterosexual" ones. Which is *pleasantly* not a huge revelation in this day and age, that a young woman would want to experiment with love and sex and be open about it at the same time. (Though apparently, "Cyrus didn't elaborate" any further in the interview.)

The 22-year-old wants everyone else to have as much freedom and empathy as she does, which is why she's launching the Happy Hippie Foundation to help homeless and LGBT youth by providing digital support groups. "The position I'm in, I feel like I've got a lot of power," she said. "But so many kids don't feel that way. They're under their parents' rule."

And while you may think them trivial, she says her armpits speak to this: "The pink pits are saying, 'Don't tell me what to do.' It's back to what I'm preaching in a way, you know, telling these kids. I'm not just saying you be yourself and I'm going to go be Miley Cyrus. I'm saying I'm going to be my (expletive) self, too."