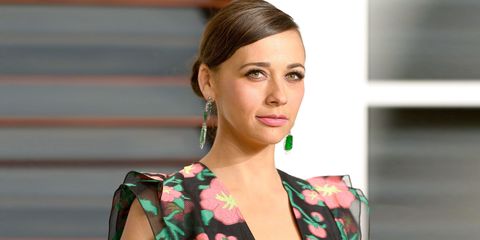 Why did you want to produce Hot Girls Wanted––what drew you to the topic?

Yes, it does feel like a subtle and progressive exploitation; but I can't make claims about it being impossible to feel empowered, because I do think that lots of women (especially women who are not teenagers) do feel comfortable and good about their bodies, and do feel that being sexual––whether it's on screen or in private––makes them feel empowered. I would never take that away."

"Women are forced into blow jobs, they're being forced to vomit, and they're crying."

There's an equation of money equals power. That's the key to why everybody feels like it's okay. 'If I'm getting money then that money makes me powerful.' That's ignoring so many of the other psychological, emotional, physical and physiological costs."

How can the industry change for the better and be more pro-women?

Was researching the movie and talking to these girls emotionally difficult, or even disturbing, for you?

How do you feel about the state of feminism in Hollywood? There's still such a discrepancy in pay between men and women.

"I think any progressive movement is going to have a lot of in-fighting. That's certainly true of feminism. To me, it would be great to decide on some commonality because it feels like anytime someone speaks out, there are twenty other dissenting opinions that cut through any good that can be done. And listen, I'm guilty of that too. I think everyone is really passionate about what it is that women need to move forward. But the thing I do know is that the conversation needs to stay open. The bottom line is the fact that we're having the conversation. The fact that there are so many great women out there who are so outspoken is a huge win for feminism."

Mehera Bonner Contributor Mehera Bonner is a news writer who focuses on celebrities and royals—follow her on Instagram.
This content is created and maintained by a third party, and imported onto this page to help users provide their email addresses. You may be able to find more information about this and similar content at piano.io
Advertisement - Continue Reading Below
More From Celebrity
Philip Hated His Royal Duties So Much He Got Sick
The Queen Says the Throne Cured Her Anxiety
Advertisement - Continue Reading Below
Matthew McConaughey on Aniston & Pitt's Reunion
Meghan Markle Got a Court Date Pushed Nine Months
Our Favorite Celebrity Halloween Costumes In 2020
The Fab Four May Never Fix Their Royal Feud
Gigi Shares Glimpse at Baby's Wardrobe
Matthew McConaughey and His Son Are Twinning
Marvelous Women Scarlett Johansson & Florence Pugh
Ashley Graham Opened Up About Sex After Childbirth