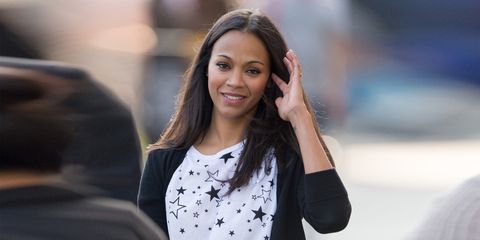 Ah, joy, yet another item to stack on the Hollywood-is-sexist pile. In an interview with USA Today, Zoe Saldana says that when she asked to include child care in her contracts going forward, she got a lot of resistance from the studios—even though they were shelling out cash left and right for perks for male celebs.

Saldana, who recently gave birth to twins, said that getting pregnant became a major inconvenience for studios, and one project apparently even considered writing her out. And when it came to negotiating for her future projects, her status as a mom threw a wrench into the works.

Movie studios "spend more money sometimes 'perking' up male superstars in a movie," Saldana said, which can include "a really phat penthouse or them staying in a yacht instead of them staying on land." When it comes to a basic need for parents, though, suddenly funds dry up.

"But then a woman comes in going, 'Okay, I have a child. You're taking me away from my home. You're taking my children away from their home. And you're going to make me work a lot more hours than I usually would if I was home. Therefore, I would have to pay for this nanny for more hours—so I kind of need that,'" she said. "And they go, 'Nope, we don't pay for nannies.'" Saldana's rep told the newspaper that the issue had been resolved during the negotiating process.

Sure, it can be hard to feel pity for someone who makes millions from her movie roles, but if even a major movie star can't get childcare as a "perk," what does that say for the average mom who has to fork over a major portion of her paycheck for childcare? Very few American companies provide childcare on site, even though it could mean a world of difference to both moms and dads across the country. Maybe if stars like Saldana speak up, more businesses will listen.