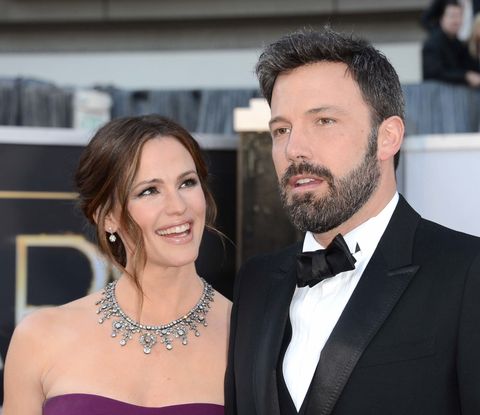 Update, 8/22: While a month has passed since Ben Affleck and Jennifer Garner officially called it quits, the estranged couple have spent quite a bit of time together after announcing their divorce.

Days after taking a family trip to Orlando's Disney World, the pair continue to hang out—regardless of Affleck's rumored affair with their former nanny, Christine Ouzounian.

Despite all the drama, PEOPLE reports that they looked "relaxed and happy" during a stroll in Atlanta, where Garner is currently shooting the upcoming film Miracles from Heaven.

"They were laughing and talking to each other and looked like they were having fun," said the mag's source.

Maybe love isn't dead after all.

Update, 7/23: Ben Affleck and Jennifer Garner are going against the norm of post-split separation by continuing to live together—even in a different house, reports People.

The two—who said they would continue to live together for awhile to ease the transition for their kids—have ditched their L.A. digs for an Atlanta residence...for now. Sources say their L.A. home is under extreme construction, so Affleck has joined his family in Atlanta at a rental home, where Garner is filming the movie Miracles from Heaven.

Oh, and the rental home? It belongs to none other than Brooke Shields. Hollywood...

Update, 7/8: Good morning! Here is some alleged new information about Ben Affleck and Jennifer Garner's divorce that will make you cry into your extra-hot, no-water chai.

According to Us Weekly, despite Affleck's reported gambling, partying, and philandering (a source close to Affleck vehemently denies this last charge), Garner repeatedly took him back for the sake of their young children.

"She always fought against the urge to throw her hands up in the air and walk away," an insider tells Us. "They've been on the brink of splitting up many times before, but it's Jennifer's worst nightmare for their children. Her biggest desire has always been to keep the family together."

On the flip side, a friend of Affleck's tells People the breakup wasn't so one-sided: "He couldn't deal with her expectations. When you're told you're not good enough, you start to believe it."

???????? We're not sure about anything ATM except that all of this is very, very sad-making—so sad-making we might need to go lie down.

Update, 7/3: Despite this week's announcement of their plans to divorce, Ben Affleck and Jennifer Garner are on a nice little family vacay with their kids. The fivesome has been spotted in the Bahamas, People reports, where they own a house and are ostensibly having lots of awkward talks and are very intentionally avoiding the internet.

Well hey. If you're going to split, kicking it off with a tropical jaunt is probably the most...festive way to do it.

Update, 7/1: According to a source for Us Weekly, Ben and Jennifer had been trying to make their marriage work for years, almost calling it quits another time before. The source adds that the two worked tirelessly on their marriage as they both come from close, tight-knit families, and wanted to make it work for their kids. (The two are parents to Violet, 9, Seraphina, 6, and Samuel, 3.)

"They were in couples therapy for years," the source says. "They were going to divorce when Sam was born but you know how it is—baby comes and solves the issues for a bit but it's just a Band-Aid. It hasn't been working for ages."

After 10 years of marriage, the parents of three released a statement to People, because they are good and thoughtful and kind.

"After much thought and careful consideration, we have made the difficult decision to divorce," the couple said in a joint statement. "We go forward with love and friendship for one another and a commitment to co-parenting our children whose privacy we ask to be respected during this difficult time. This will be our only comment on this private, family matter. Thank you for understanding."

Just. Give us a minute.

Samantha Leal Senior Web Editor I'm Sam, the senior editor at MarieClaire.com.
This content is created and maintained by a third party, and imported onto this page to help users provide their email addresses. You may be able to find more information about this and similar content at piano.io
Advertisement - Continue Reading Below
More From Celebrity
What Happens on Katie's Season?
Bennifer Recreated Their 2002 PDA Moment
Advertisement - Continue Reading Below
Why Harry's Memoir Release Date Has Upset People
The Royals Are Worried About Prince Harry's Memoir
Gabrielle Union Debuted a New, Short Haircut
J.Lo Made Out With Ben on IG for Her 52nd Birthday
Harry Is Putting the Queen in a Difficult Position
Are Will & Kate Sending a Message to Harry & Meg?
Harry and Meghan Reportedly Have a Four-Book Deal
Naomi Osaka Lit the Olympic Cauldron in Tokyo