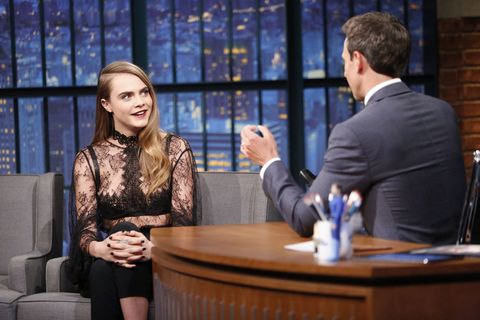 Competent beat-boxer Cara Delevingne has been making the late-night TV rounds, and on Wednesday, she stopped by Seth Meyers, where she casually told the story of how, one time, she was on this photo shoot and the bear she was posing with nearly crushed her with its paw. "It was really funny," she said because she has never Googled "force of bear swipe" as a question before. (Answer: unclear, but the internet does agree a bear can decapitate a moose with one swift motion.)

"If you die by bear, that's cool," she offered by way of explanation after the audience cracked up. "If I had that on my grave, I'd be like, 'yeah.'"

To hear more Cara-isms about the Naomi Campbell-level demands of animal models (she couldn't wear deodorant nor be on her period) and what it's like having a live tarantula crawl over your face, watch the interview below.