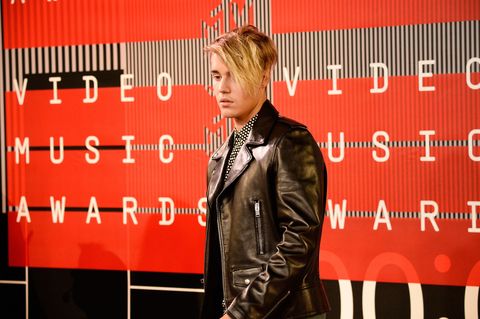 Update, 9/3: Confirmed: Justin Bieber is an emotional guy. Case in point? His VMAs performance had him in tears towards the end, as he welled up and let the waterworks flow.

Appearing on Jimmy Fallon, the superstar explained that 1) yes, he totally cried 2) he did it because he was so happy.

"It was so overwhelming," said Bieber. "I missed some cues. So I was a bit disappointed about that. But just the support...I didn't expect them to support me in the way they did. Last time I was at an awards show, I was booed."

He continued: "I worked so hard at this album…at becoming the man I want to become and stepping into that situation, you just can't help but feel judged. I wanted to win so badly, I just put everything on the line. It was authentic and real…I was just wanting it so bad."

Watch the candid interview below:

Update, 9/1: If you were confused as to why Justin Bieber was bawling towards the end of his performance at the VMAs, wonder no more—turns out the answer is pretty darn cute.

According to Gossip Cop, the reason that the Biebs broke down is because the last time he was onstage he was, well, booed, and that this time—with everyone applauding—he had a moment.

"He worked so hard not just on the performance but himself," the source revealed. "He didn't know how people would accept him. When he saw them on their feet cheering, he was overwhelmed."

"It meant a lot to him," the source adds. Okay, Justin, okay. With this and that James Corden karaoke bit, we're starting to see the kid we fell in love with from YouTube. (That's a good thing.)

Original story, 8/30: We can guarantee this was the thought process of anyone who watched Justin Bieber's VMAs performance:

2) Oof, he's running out of breath. It's okay Biebs, not everyone can be Beyoncé.

3) Really, Justin, what is this monologue?

That's right. After performing two of summer's most inquisitive tunes: "Where Are You Now?" and "What Do You Mean?", he finished by being levitated in the air after an inspiring speech about following your dreams. Then, he cried. Like, legit cried.

Uh, there, there Biebs. It's gonna be okay.