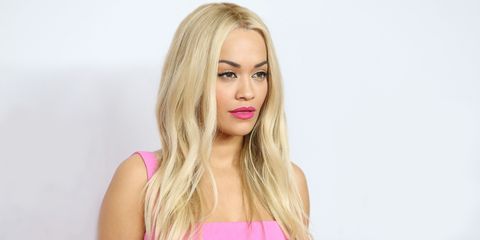 In excerpts from a new biography, Rita Ora tells the painful story of how she, as a teenager attending theater school, was sexually abused by a 26-year-old man.

Audibly choking up, the X Factor judge recalled how being with the unnamed man made her feel like "[she] could take over the world."

Heartbreaking, but so important that women everywhere, including celebrities like Ora, are speaking out. Like Lady Gaga said about her video on campus sexual assault, "Perhaps you will find some peace in knowing you are not alone."

Chelsea Peng I'm Chelsea Peng, the assistant editor at MarieClaire.com.
This content is created and maintained by a third party, and imported onto this page to help users provide their email addresses. You may be able to find more information about this and similar content at piano.io
Advertisement - Continue Reading Below
More From Celebrity
Simone's Boyfriend Sent Her the Sweetest Message
What Happens on Katie's Season?
Advertisement - Continue Reading Below
Rebel Wilson Recreated This Britney Spears Look
Jennifer Lopez Flew Back From European Getaway
Jennifer Lopez Wears Old Bracelet From Ben Affleck
Simone Biles Cheers on MyKayla Skinner
See the Royals Socialize at a 1991 Cocktail Party
Eugenie Posts Pics from Harry & Meghan's Home
Queen Trolled Tourists Who Didn't Recognize Her
Blake and Ryan Recreated Their First Date on IG