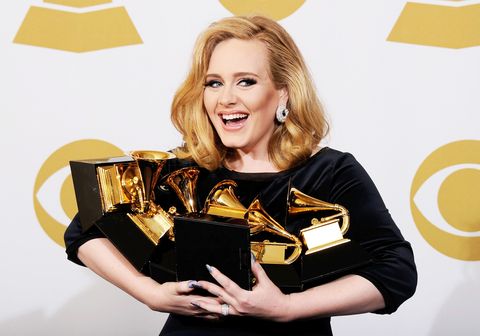 Adele is back with a new single (hello, "Hello"), and now it's time to find out what she's been up to. The 27-year-old singer all but disappeared from pop culture after releasing her Bond theme, and admits that she's been out of the loop. "I feel like I don't know what's going on in the charts and in popular culture," she tells Rolling Stone. "I've not lost touch with, like, reality. Just with what's current."

She might not know that 2015 is the year of celebrity breakups and supermodel friendships, but that's probably because Adele's been busy dealing with her own life. From her beef with Blur to her thoughts on feminism, here are 9 things we learned from her Rolling Stone interview.

She fears fame, in part because of what happened to Amy Winehouse: "People think I hate being famous. And I don't. I'm really frightened of it. I think it's really toxic, and I think it's really easy to be dragged into it. Watching Amy deteriorate is one of the reasons I'm a bit frightened. We were all very entertained by her being a mess. I was f—king sad about it, but if someone showed me a picture of her looking bad, I'd look at it. If we hadn't looked, then they'd have stopped taking her picture. That level of attention is really frightening, especially if you don't live around all that showbiz stuff."

She's perpetually star struck: "I'm not sure if I'll ever not feel a bit overwhelmed when I go to places where there are loads of stars. I always feel like I'm gonna get thrown out. Or it's going to turn out to be some, like, hidden-camera show. Like someone's gonna send me back to Tottenham."

She's working on her fitness (like Fergalicious before her): "To get in shape for myself, but not to be a size zero or anything like that. I mainly moan. I'm not, like, skipping to the f—king gym. I don't enjoy it. I do like doing weights. I don't like looking in the mirror. Blood vessels burst on my face really easily, so I'm so conscious when I'm lifting weights not to let them burst in my face. And if I don't tour, you'll catch me back down at the Chinese!"

She wants a squad. More specifically, she wants Rihanna: "I've heard about a squad. I wish my squad was all supermodels. We are, in our brains. I guess I have my own squad. It's not as interesting as some of the other squads that are around right now. But maybe Rihanna can be in my squad! That would be really cool. Oh, God. She's life itself, isn't she? I love her."

Becoming a mom made her a hippie: "I think actually the pregnancy was perfect timing in the end. It might've seemed like the most ridiculous time to have a baby, but I was starting to get a bit afraid of everything. When I had him, it made everything all right, and I trusted everything because the world had given me this miracle, you know, so I became a bit of a hippie, an Earth mother."

She has beef with Blur (remember when Damon Albarn told press she was insecure?): "It ended up being one of those 'don't meet your idol' moments.' And the saddest thing was that I was such a big Blur fan growing up. But it was sad, and I regret hanging out with him. None of it was right. None of it suited my record. He said I was insecure, when I'm the least-insecure person I know. I was asking his opinion about my fears, about coming back with a child involved—because he has a child—and then he calls me insecure?"

She wonders if her success had to do with her weight: "Would I show my body off if I was thinner? Probably not, because my body is mine. But sometimes I'm curious to know if I would have been as successful if I wasn't plus-size. I think I remind everyone of themselves. Not saying everyone is my size, but it's relatable because I'm not perfect, and I think a lot of people are portrayed as perfect, unreachable, and untouchable. I've been asked 'Would you do Playboy?' so many fucking times, it's ridiculous. And is that because I'm a woman or because I'm fat?"

She's a feminist (because duh): "I'm a feminist. I believe that everyone should be treated the same, including race and sexuality."

Adele for all the awards. Oh wait, she already won them, nevermind.