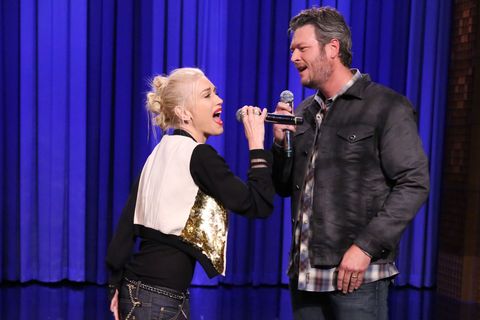 It seems like just yesterday that Blake Shelton and Gwen Stefani's highly adorable relationship was made official. Oh wait, it was just yesterday. The new couple, both rebounding from recent divorces, are moving at lightening fast speed—and now it appears as though they've written a song together.

Shelton's rep confirmed that he and his fellow Voice coach have penned a "mid-tempo country ballad" wherein Blake will be returning to his "real country" roots. In the immortal words of Gwen Stefani herself, this sh*t is bananas.

A source tells People that Stefani definitely holds her own in the country department, saying "It's amazing how good she sounds on a pretty country song." So, what is this duet about? The end of an unspecified relationship, which *might* have something to do with Shelton's split from Miranda Lambert and Stefani's split from Gavin Rossdale.

Anyway, you should probably load up on tissues because there's no way anyone's coming out of this without crying/eating their emotions in the form of cheese.

Mehera Bonner Contributor Mehera Bonner is a news writer who focuses on celebrities and royals—follow her on Instagram.
This content is created and maintained by a third party, and imported onto this page to help users provide their email addresses. You may be able to find more information about this and similar content at piano.io
Advertisement - Continue Reading Below
More From Celebrity
How to Copy Katie Holmes' Effortless Style
Chrissy's Red Lip Look Is Perfect for the Holidays
Advertisement - Continue Reading Below
Kate's Blazer and Sweater Combo Is So Chic
Princess Diana's Brother Called Out 'The Crown'
Ciara Talked Her Painful Pregnancy With Baby Win
Hailey Bieber Wears Sultry YSL for Her 24th Bday
J.Lo's AMAs Number Caused Censors to Freak Out
Gigi Shares New Photos of Her Baby Girl
Um, Why Is the Weeknd's Face Bloodied at the AMAs?
Gwen Stefani Walked Off on 'The Voice'