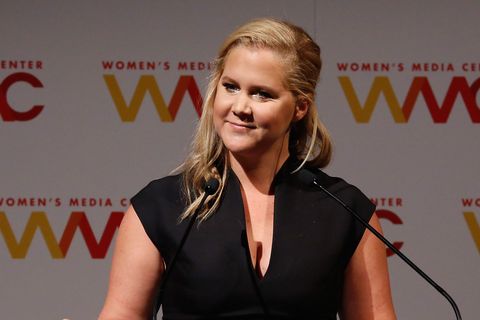 Amy Schumer gave a speech at the 2015 Women's Media Awards in New York City, and everything she said was predictably hilarious, poignant and resonating. The entire speech is worth of reading, but here are the highlights — including why Schumer doesn't regret criticizing the Kardashians on SNL.

On writing her 12 Angry Men parody: "I wanted to write it myself. I was like, I'll write the insults, thank you. What some people don't know is that I also directed it. It was good for me—women can do anything that we want to do."

On women's magazines: "I have a real love-hate relationship with women's magazines. These photos are not important, and it's images that we see every day. There's no need to pit women against each other."

On criticizing the Kardashians: "I said it's not that positive for girls to see an entire family of women take their faces they were born with and say: 'Suggestion.' And I stand by that. People we see the most, that gets in our mind."

On Khloe Kardashian's weight loss: "Her Instagram used to be her always having fun, and now it's her pulling a Mac truck, pulling a house. 'I'm having fun!' I'm just like, everybody's looking at these women; slow down and eat a bagel with your friend."

On women in media: "In 2014, over 85 percent of directors, producers, writers, and editors were men—the most profitable parts of the media. I hope next year we're up here celebrating a huge jump. Fifty-fifty."

On giving this speech in front of feminist trailblazer, Gloria Steinem: "I might not be your cup of tea. Gloria! Thank you so much, keep fighting the fight."

On Our (Maybe) Future President: "Hillary Clinton, when I told her that I wanted to help her with her campaign, she was like, 'Uh ... we're good.' Ha."

Mehera Bonner Contributor Mehera Bonner is a news writer who focuses on celebrities and royals.
This content is created and maintained by a third party, and imported onto this page to help users provide their email addresses. You may be able to find more information about this and similar content at piano.io
Advertisement - Continue Reading Below
More From Celebrity
Anna Kendrick Looked Pretty in Pink at a Premiere
John Mulaney & Olivia Munn Might Split Up: Source
Advertisement - Continue Reading Below
The Sussexes Worried Archie Would Attract Mockery
Diana Would Be "Thrilled" for Harry and Meghan
'Friends' Actor James Michael Tyler Has Died at 59
Prince William Mentioned Harry By Name, Finally
Republicans Want Meghan Markle Stripped of Title
Princess Diana Would Be "Horrified" By Portrayals
The Cambridges Head Out on Vacation
Spice Girls Reunion Tour Might Feature Posh Spice