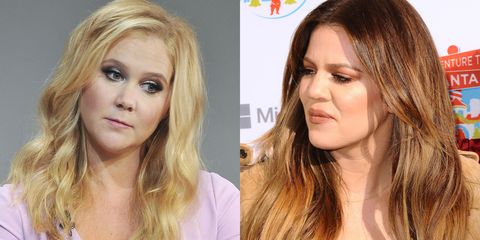 Khloé "Revenge Body" Kardashian probably spent her Saturday night further "befriending" James Harden or running her latest whale jokes by Mason before aiming them at Kim, but thanks to modern technology, she seems to have caught Amy Schumer's vaguely where-have-all-the-female-role-models-gone-themed opening monologue on SNL. ICYMI, here it is.

ICYMI and don't care to go to the 2:10 mark, here's the pertinent bit: "We used to have Khloé. Khloé was ours, right? Whenever there's a group of women, you identify with one of them, right? [Interlude href='https://www.marieclaire.com/culture/news/a13938/i-watched-sex-and-the-city-for-the-first-time/' target='_blank">watch it for the first time years after it aired, she\'s actually the sanest.'] But then Khloé lost half her body weight—she lost a Kendall, and we have nothing."

Apparently, Khloé did not take too kindly to being told her relatability melted away along with a Kendall's worth of poundage and fired off this tweet Sunday.

No need 2 tear down others just 2 make urself feel bigger. It actually makes u quite small. I'm on a healthy journey. I don't care 4the hate

Honestly, this could have all been avoided if Amy had gone for the obvious choice (THE VELVET CAR, AMY), but since when have we known her to play it safe? Now we wait.