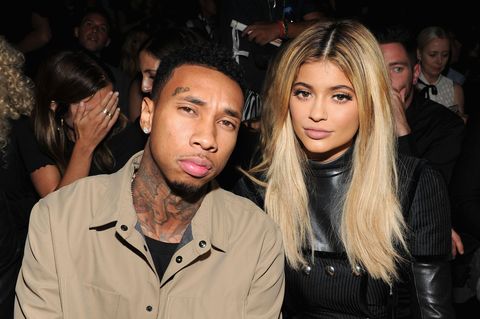 Update, 11/22: It's barely been 48 hours since Kylie Jenner reportedly dumped Tyga for reasons so unforgiving they couldn't be mentioned, but it seems the pair is already back together. (Or, perhaps more realistic despite all the anonymous sources "confirming" that they'd split, they didn't break up at all.)

Last night on Snapchat, Jenner shared a picture of the two of them with this telling caption: "Everyone needs to chill."

Original story, 11/20: No sooner had they become official enough to warrant a nontraditional Halloween costume have Kylie Jenner and Tyga allegedly broken up, TMZ reports.

A source tells the publication the couple called it quits Thursday after the rapper did something so objectionable it could not be named. In the other corner, we've got a second source connected to Tyga who says Kylie caved under "pressure from the Kardashians" to sever the relationship.

Who's right? Will she throw away his mugshot even though it's an integral part of her living room décor? It's all he said, she said at this point, but we'll keep up with the story and bring you any updates.

Chelsea Peng I'm Chelsea Peng, the assistant editor at MarieClaire.com.
This content is created and maintained by a third party, and imported onto this page to help users provide their email addresses. You may be able to find more information about this and similar content at piano.io
Advertisement - Continue Reading Below
More From Celebrity
Marvelous Women Scarlett Johansson & Florence Pugh
Gigi Shares Glimpse at Baby's Wardrobe
Advertisement - Continue Reading Below
Matthew McConaughey and His Son Are Twinning
Ashley Graham Opened Up About Sex After Childbirth
Brad Pitt and Nicole Poturalski Have Broken Up
Chrissy Teigen Shared a Sweet Video With Luna
EmRata Displayed Her Bump in an Open Button-Down
Harry Sent a Legal Warning Over "False" Article
Chrissy Teigen Talked About Her Baby Loss Photos
Chrissy Teigen Opens Up About Her Loss