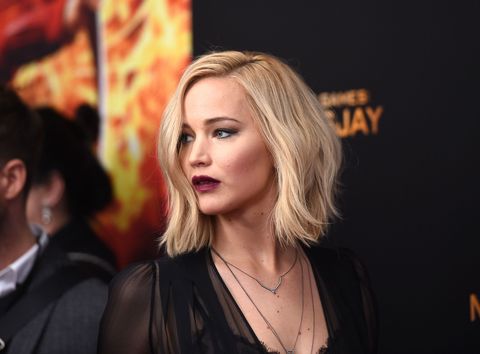 Update, 12/14: Casually stomping on the dreams of millions with the heel of her studded Louboutin booties, Jennifer Lawrence plainly stated that she would not be joining in the proverbial milking of the cash cow that is the Hunger Games franchise.

"I wouldn't be involved," Lawrence said of the much-discussed prequel in an interview with Variety. "I think it's too soon. They've got to let the body get cold, in my opinion."

Which is fine, because that leaves more time for more projects like twinning with Amy Schumer.

Original story, 12/8: Rejoice, people who aren't ready for The Hunger Games to be over. Despite the franchise's final film being in theaters, Lionsgate just revealed that they're open to making prequels. This is Fantastic Beasts and Where to Find Them all over again.

During an appearance at the UBS Global Media and Communications Conference in New York, Lionsgate chairman Michael Burns revealed that the franchise "will live on and on," and that prequels certainly aren't out of the question. No plot information has been revealed at this point, but Burns confirmed that "if we went backwards there obviously would be arenas." Good to know.

Not sure how we'll get through a Hunger Games movie without making jokes about Pita Bread every time Peeta comes on screen, but still. Exciting news.