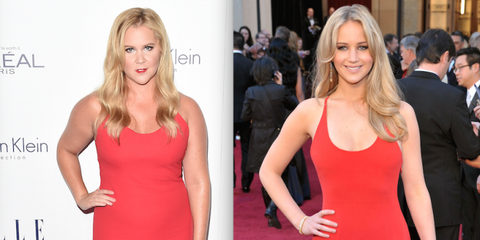 On Tuesday's episode of Live with Kelly and Michael, Jennifer Lawrence dashed her own hopes that she and Amy Schumer would arrive in matching Dior at this year's Golden Globes. "I mean, well, I don't think we'll be able to," she said. "I don't think Dior has a sense of humor." Then, perhaps remembering that she is the house's ambassador and has been for three years, she said "But they have a great sense of fashion!"

Was it part of a sneaky plot to exit her contract, a move that would delight those in the fashion community who haven't been too keen on her latest red-carpet choices? Or was it just JLaw being JLaw? Either way, she and Schumer and still going to have a ball.

Original story, 12/13: Amy Schumer and Jennifer Lawrence may be up against each other at the 73rd Golden Globes, but don't go thinking competing nominations can tear these fast friends apart.

In a recent interview with E! News, Lawrence admitted she's hoping they'll wear "the same exact thing," before insisting, "That's my mission. I really want us to wear the same thing!"

Lawrence, who currently serves as one of the celebrity faces of Dior, explained her idea for the fashion house to work up identical creations for herself and Schumer. "She's going to have to wear Dior," the 25-year-old pointed out. "I'm just going to have to have Dior make two of whatever they're making for me."

If the plan pans out, it won't matter which Best Actress in a Comedy nominee ends up going home empty-handed come January 10. Because at least they'll both A) look great in matching gowns, B) still be winners to each other—and C) always be the living definition of #friendshipgoals to us.

This content is created and maintained by a third party, and imported onto this page to help users provide their email addresses. You may be able to find more information about this and similar content at piano.io
Advertisement - Continue Reading Below
More From Celebrity
Chrissy's Daughter Luna Is Learning to Read
The Queen Spent a Night in Hospital
Advertisement - Continue Reading Below
Kate and Will Made Emma Watson Crack Up
Blake Lively Called Out an Instagram Account
Khloé and Tristan Have "No Label" Right Now
Kate and Will Share Intimate Moments in New Photos
Scott Disick Avoids Travis Barker, Apparently
Adele's Latest Date Look Was a Leather Suit
Alicia Silverstone Got Banned From a Dating App
The Queen Just "Reluctantly" Canceled a Trip