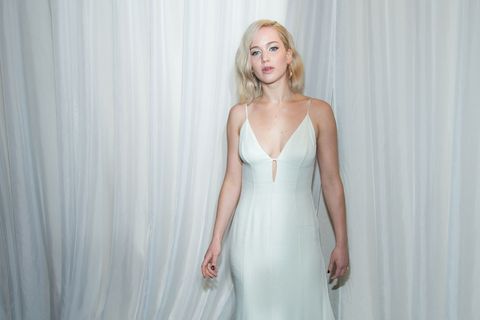 Everyone seems fascinated by Jennifer Lawrence's love life, including New York Times writer Maureen Dowd, who asked JLaw about her split from Coldplay's Chris Martin during a TimesTalk.

"This is the problem with press," Jennifer answered, bringing a proud tear to the eye of single people everywhere. "When you're talking and hanging out with somebody, it's very different when it's written. I'm not a lonely person. I never feel lonely."

She continued her defense of the single life, saying "It's not a sad thing to be alone. I think what I was trying to get across was that I don't feel a lack of something not being in a relationship. I don't feel like there is an emotional void to be filled."

A true "Yas Queen" moment if there ever was one.

Meanwhile, David O. Russell (who directed Jennifer in Joy) spoke about how hard it is for his muse to find someone who isn't threatened by her success. "It's the contradiction. You yourself are powerful, but you want to be with somebody who is also powerful that you can look up to. But to find someone who can do that but also respect your power and not be threatened by it, that takes a very special thing."

Which brings us to Larry David. Apparently, the 68-year-old comedian is the lucky man Jennifer has "so many sexual and boyfriend, marriage feelings for." So, um. Do with that information what you will. We'll be over here toasting JLaw as a role model for single ladies everywhere.

Watch the full interview below.

Mehera Bonner Contributor Mehera Bonner is a news writer who focuses on celebrities and royals—follow her on Instagram.
Advertisement - Continue Reading Below
More From Celebrity
Sel on Healing After Justin Emotionally Abused Her
Bey & Jay Were the Cutest at the Roc Nation Brunch
Advertisement - Continue Reading Below
Prince William Just Got a New Royal Title
Chrissy Solved a Mystery With a Dolly Parton Post
Harry Felt Constrained by Royal Duties Growing Up
Er, Meghan and Kate Haven't Spoken Since Megxit
Why Harry and Meghan Should Keep Their Protections
Taylor Swift Explains Why She Loves Joe Alwyn
Real Humans Justin & Jessica Are Going to Therapy
Why the Queen Canceled One of Her Annual Events