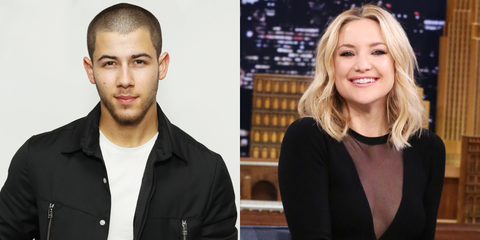 When agreeing to do the cover story for Complex, Nick Jonas probably figured he'd have to address those Kate Hudson romance rumors. But he probably didn't quite factor in the line of questioning presented by Kerensa Cadenas—admittedly spurred on by her second Old Fashioned.

Here, the best part of the interview, presented totally with commentary:

"Are you having sex with Kate Hudson?"

"Umm," he laughs. "You know, it's interesting. You're allowed to ask me whatever the fuck you want and I'll answer it, or not."

"You'll answer it in whatever ways it fits."

"Kate's incredible. We had an unbelievable connection as two humans who just admire things about each other, and see something in each other that's beautiful. Out of my best effort to respect her and her privacy, I'm not going to say if we had sex or not. But we did have a beautiful connection. Even now I have so much admiration and respect. She's amazing."

His face says it all. My face flushes afterward and I apologize for asking a shitty question. Jonas laughs it off, saying that I have a job to do. "It doesn't shock me or surprise me. I don't get pissed off about it. I've come to accept it. With that in particular. It's a bizarre matchup to a lot of people." We start talking about people's sex lives and he shares a few of his crushes: Emilia Clarke, Amy Schumer, and a conflicting one. "I know they are besties, so I can't really say this, but Jennifer Lawrence, too."

Do with that what you will, but we say the evidence kind of speaks for itself. (Also, how cute is Nick Jonas?)