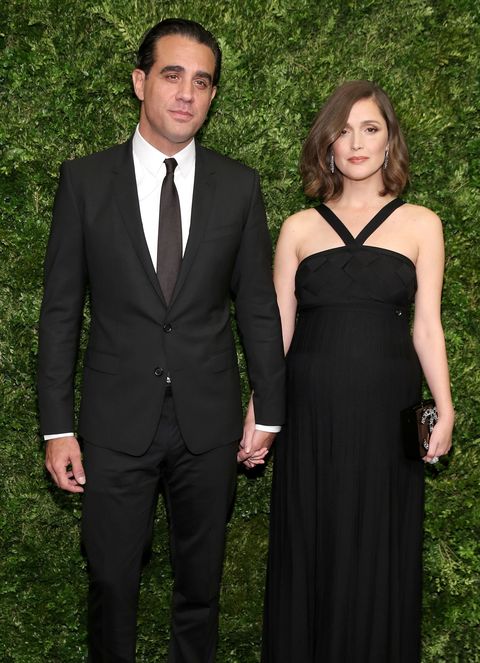 Rose Byrne and her boyfriend, Bobby Cannavale, have officially welcomed their son into the world, a fact Bobby adorably announced on The Late Show with Stephen Colbert.

"I had a baby on Monday, yeah. You know, I didn't do anything...and I'm so tired," he told Stephen after casually dropping the news. "I think I've gained 28 pounds since Monday. I mean, I'm not kidding you. Like, this jacket fit so well, like, last Thursday. But I've been eating so much."

Rose and Bobby named their baby Rocco, and while this is the name of Madonna's son (as well as our favorite '90s cartoon character from Rocko's Modern Life), he's actually named after the saint. "Actually, yeah, patron saint of the sick...pretty sure," Bobby said. "Could be wrong. I'm tired."

This is the first child for Byrne, and the second for Cannavale—who has a 20-year-old son, Jack. By the way,  Rose and Bobby began dating in 2012 and have worked together on several movies, including Spy. Clearly, Rocco is their greatest collaboration to date.

Mehera Bonner Contributor Mehera Bonner is a news writer who focuses on celebrities and royals.
This content is created and maintained by a third party, and imported onto this page to help users provide their email addresses. You may be able to find more information about this and similar content at piano.io
Advertisement - Continue Reading Below
More From Celebrity
Hailey Wore a Nude Blazer and Micro Dress
Gabrielle's TikTok About Her Prom Date is So Funny
Advertisement - Continue Reading Below
Victoria Beckham Shuts Down 'Spice World 2' Rumors
Kendall Jenner Shared Her Experience of Anxiety
'The Voice' Star Blake Shelton Opens Up About Gwen
Sussexes Share New Birthday Photo of Archie
Charles Is Still Upset Over Harry's Oprah Tell-All
Meghan and Harry Share New Archie Photo
The Cambridges Share Their First Full YouTube Vid
Courteney Cox Said the 'Friends' Fountain Was Grim