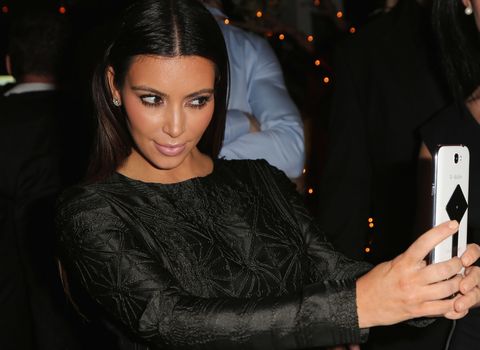 Before the fated day of March 8th, Kim Kardashian's social media game was subpar at the best of the times. Sure, she broke the internet with a nude photo, picked up its fragmented remains, and then broke it again with yet another nude photo, but what about Snapchat.

Kim has been teasing the American people with hope of a Snapchat takeover for months (she first announced her plans in DJ Khaled's snap), but she's finally followed through. And bless her heart, she even figured out how to make the pen pink.

But wait, there's more to Kim's Snapchat journey than meets the eye. Turns out she actually opened up an account several weeks ago in London, but kept it on the DL so she could "lurk."

We totally respect that lurking life, but thank god Kim has graced Snapchat with her official presence, because one reality show, one mobile game, and several social media accounts just isn't enough.

Kim's username is KimKardashian (what else), so go forth.

Mehera Bonner Contributor Mehera Bonner is a news writer who focuses on celebrities and royals—follow her on Instagram.
This content is created and maintained by a third party, and imported onto this page to help users provide their email addresses. You may be able to find more information about this and similar content at piano.io
Advertisement - Continue Reading Below
More From Celebrity
Billie Eilish Posts Nikes Version of 'The Dress'
Ashley Graham Celebrates Body With Nude Photo
Advertisement - Continue Reading Below
Gigi Hadid's Baby Is Already Wearing Moschino
Adele Is Hosting 'SNL' in a "Full Circle" Moment
Harry Pranked the Queen by Changing Her Voicemail
Celebs Join the #MyNameIs Movement on Twitter
The Queen Laid Down the Law at the Royal Wedding
Why Meghan Might Stop Talking About Social Issues
Jennifer Lopez Rocks Activewear by the Pool
Diana Compared Royal Life to Wedding Day Stress