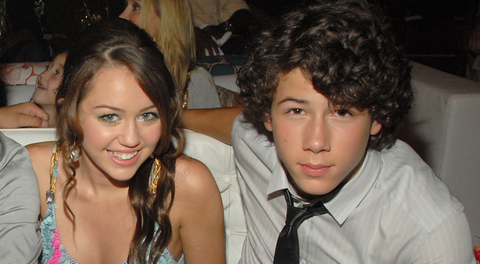 First kisses. If we had to guess, your experience probably included the following: 1) bumping noses 2) bumping teeth 3) not knowing what to do with your tongue 3) all of the above. (If not, go home, Casanova.) But it should make you feel better to know that those awkward first kisses aren't just for us normies—you have to deal with that shit even when you're a *famous* teen, as Nick Jonas kindly reminds us.

On Nick Grimshaw's BBC 1 radio show, the 23-year-old revealed that his first kiss was with Miley Cyrus, that it was outside of a pizza place, and that his breath definitely reeked of onions.

"I kissed her outside of California Pizza Kitchen in Hollywood—very romantic. I'd just had a pizza that had onions all over it, I'm sure that my breath smelled terrible," he said. When pressed whether *she* remembers his breath being terrible, he stated that he'd have to ask her. "But I'm sure she does," he conceded. "It was probably pretty potent."

He also played a game of "Snog, Marry, Avoid" (AKA f*ck, marry, kill for us adults) with these options: Miley, Demi Lovato, and Kate Hudson. (We see what you did there Grimshaw.) He avoided Miley (see: onions) and added that "Demi and I are really good friends so I'd marry her because you want to marry your best friends—even though it's weird to say that. I watched her on one of these that she did and she said she'd marry me so I have to pay it back."

"And then I guess snog Kate Hudson, right? That's logical?" Ah, yes, Nick. It's all about the logic here.

Oh, and if you're in the mood for some nostalgia/to really get a good mental picture of that first kiss, here's Miley and Nick making eyes at each other during a 2010 performance of "Before the Storm":

Samantha Leal Senior Web Editor I'm Sam, the senior editor at MarieClaire.com.
This content is created and maintained by a third party, and imported onto this page to help users provide their email addresses. You may be able to find more information about this and similar content at piano.io
Advertisement - Continue Reading Below
More From Celebrity
Meghan and Harry Shut Down Their UK Charity
Naomi Campbell Is a First-Time Mom
Advertisement - Continue Reading Below
Ariana Grande Got Married Over the Weekend
Ariana Grande Quietly Married Dalton Gomez
Joie de Tracee
Jennifer Lopez and Ben Affleck: Everything We Know
Harry & Oprah's Mental Health Doc Has a Title
Serena Williams Might Miss the Tokyo Olympics
Jennifer and Ben Have "Unreal" Chemistry Together
The Sussexes Marked Archie's Bday in a Lovely Way