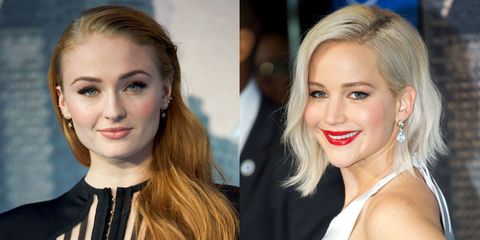 Today in weird news, Sophie Turner revealed that she was accidentally punched in the vagina by Jennifer Lawrence while on set of X-Men: Apocalypse, a misunderstanding which—let's be real—could only ever happen to JLaw.

"She punched me in the vagina once," Sophie explained to Just Jared. "I didn't ask her to either. It just happened. Evan [Peters] and I were having a fake fight and I said something like, 'I'll c-nt punch you' or 'I'll punch you in the crotch' and then Jen thought that I said, 'Please c-nt punch me Jen.' So she punched me in the vagina and I was like, 'Awesome.' It was pretty funny."

But vaginal misunderstandings aside, Sophie seems to adore her co-star, saying, "she is just how you'd want Jennifer Lawrence to be. She's exactly the same person that you see in interviews."

Good to know that this is a reality: