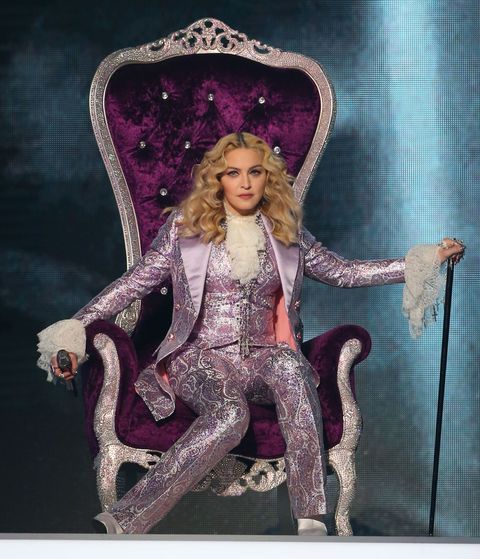 Once upon a time, Madonna said she didn't really have an interest in meeting other famous people—except one, who was playing rather hard to get.

"The person I most want to meet is President Obama," she said in an interview with Us Weekly. "When the heck am I going to meet him? He just needs to invite me to the White House already. He probably thinks I'm too shocking to be there. I'm serious. If I was a little bit more demure…or if I was just married to Jay Z. Hey, if Jay would only take me as his second wife, then I'd score an invitation."

But as luck/her Madge-y powers would have it, the two did meet backstage at Jimmy Fallon on Wednesday, where the president was filming an interview and Madonna was taping a musical appearance for the "one of a kind" show airing Thursday.

She probably wasn't in the right state of mind for this, but let's just imagine the new friends discussed her Met Gala outfit-cum-political statement.

Chelsea Peng I'm Chelsea Peng, the assistant editor at MarieClaire.com.
This content is created and maintained by a third party, and imported onto this page to help users provide their email addresses. You may be able to find more information about this and similar content at piano.io
Advertisement - Continue Reading Below
More From Celebrity
Harry & Meghan's Drama Won't Be on 'The Crown'
Will's Talk with Charles That Led Him to Kate
Advertisement - Continue Reading Below
The Queen Saved Will from a Breakdown as a Teen
Blake Can't Believe She's Still Married to Ryan
Hilary Duff Reveals Her Pregnancy on Instagram
Prince Philip Has "Walked Away" From Prince Harry
Jessica Mulroney Slams Fake Friends on Instagram
Serena Posted Olympia's First Tennis Lesson on IG
Camila Cabello's Hair Has *Never* Been This Short
Diana's Note About Her BBC Interview Is Missing