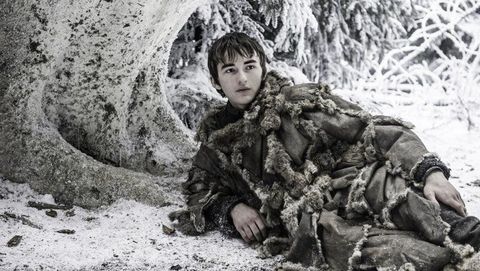 Look guys,we know Jaime and Cersei Lannister are totally brother and sister, but their love is real, okay?! That said, fans probably aren't emotionally prepared to deal with more sibling incest on Game of Thrones, and the actor who plays Bran Stark definitely just floated the possibility.

Isaac Hempstead Wright spoke to The Hollywood Reporter about Bran finding out that Lyanna Stark is Jon Snow's real mother, but noted that we still don't technically know who Jon's father is.

"When Bran sees his father's reaction and understands that this is a surrogate child his father has brought up, he thinks to himself, 'Well, wait, what surrogate children has my father brought up? Oh! Jon Snow! So Jon Snow isn't my half-brother.'" Wright said. "But we still are pretty clueless as to the father, I think."

It's likely that Jon's real father is Rhaegar Targaryen, but Wright has another (totally traumatizing) theory. "At this stage, it could even be Ned. There could be a Cersei and Jaime thing going on there," he said.

Go back to being a raven or whatever, Bran. We can't deal with this right now.