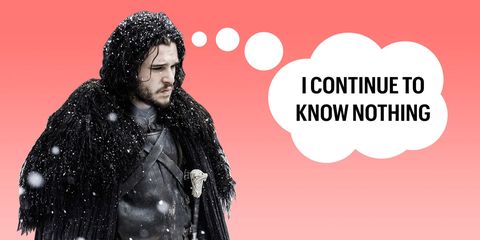 Jon Snow is alive, but—as Ygritte was so fond of telling him—he knows nothing. Like, literally nothing at all. The poor guy is clueless about everything—from how to style his hair, to who his parents are—and he needs help. And also, probably a well-qualified therapist.

Thanks to hardcore Game of Thrones fans getting their sleuth on, there are several captivating Jon Snow theories that help answer some major questions. But which theories will come to pass, and which have already been shut down? That's where this extremely nerdy but totally necessary guide comes in. We got you.

Jon Snow will presumably catch up with the rest of the world and realize he's a Targaryen at some point, but the question is *how.* Game of Thrones audiences assume Bran will drop the bombshell, but Reddit user jamieandclaire theorizes that Jon will discover his own tombstone while trolling the Winterfell crypt next season. Inscribed on said tombstone? The names of his real parents, 'cause Ned Stark craftily wrote them there. The posthumous hijinks!

People were theorizing about Jon Snow's demise long before he was stabbed by his brothers in the Night's Watch—after all, GOT isn't exactly loyal to its characters (ahem, Red Wedding). But when Jon woke up naked and afraid (and wearing Ugg boots) that theory was shut down harder than his Valyrian steel sword. Which, to be fair, is not that hard due to it being made of rubber.

A hero lives among us, and that hero is Reddit user Sparkledavisjr. This lip-reading genius took it upon herself to figure out what Lyanna Stark whispered to Ned, saying "Lyanna starts by whispering 'His name is,' and then what follows appears to be a three syllable word that appears to start with a J. I'm not a great lip-reader, but I'm fairly certain what she says is Jaehaerys."

Okay, so let's break this down: Jaehaerys I was the 4th Targaryen to own Iron Throne, and was known to be a pretty chill guy. Meanwhile, Jaehaerys II was Jon's great-grandfather, and was also pretty chill—despite his short reign. If Lyanna wanted to honor Jon's father, Rhaegar Targaryen, it makes sense that he'd be given a family moniker, right?

Fact: Jon and Daenerys are totally related. In fact, she's his aunt. But has that ever stopped love from blossoming on Game of Thrones? Hell no. Daenerys needs allies if she's going to sit on the Iron Throne, and nothing makes for allied kingdoms like an arranged marriage between a Stark and Targaryen. Westeros lore seemingly supports this theory, as Daenerys's ancestor Queen Rhaenyra agreed that a Targaryen princess would one day marry a Stark. Plus, Sophie Turner says so. No, really, she said "I think Jon and Daenerys are going to end up together, probably." See? SHE GETS IT.

Jon Snow *might* not be the only person in Westeros who knows nothing. Apparently, some corners of the internet (hi again, Reddit) seem to think Lyanna Stark had twins: Jon Snow and Meera Reed. Think about it: they're the same age(ish), and their hair is identical. Meera's dad was also there the day Lyanna gave birth, and it's possible that either she or Ned gave him one of her two babies to care for. Actress Ellie Kendrick's take? "Hey, I'd love it to be true because it would mean great things for my character, but I'm holding back on speculation for now. I think what's been going on in George RR Martin's brain is so much more a complex wormhole than we could possibly imagine."

According to Melisandre, Azor Ahai was a mythical figure who's due to be reborn any day now—and, as Rhaegar Targaryen says,"his is the song of ice and fire." There is dueling evidence as to whether Jon or Daenerys is the reincarnation of Azor, but now that we know he's part Targaryen, Jon has plenty of the hallmarks. Most importantly, being "the blood of the dragon."

Mehera Bonner Contributor Mehera Bonner is a news writer who focuses on celebrities and royals.
This content is created and maintained by a third party, and imported onto this page to help users provide their email addresses. You may be able to find more information about this and similar content at piano.io
Advertisement - Continue Reading Below
More From Celebrity
Chloe From 'Too Hot to Handle' Is in 'The Circle'
Comparing the Two Biggest Royal Weddings
Advertisement - Continue Reading Below
Kate, George, and Charlotte Were Seen Shopping
J.Lo Shares First IG Photo Post A-Rod Split
Harry Has Experienced "Frostiness" from Royals
Billie Eilish Just Debuted a Bouncy Blonde Blowout
Gigi Shared an Adorable Spring Selfie With Khai
Katie Holmes Posted a 15th Bday Tribute to Suri
Chrissy Teigen Talked Stigma Around Infertility
Beyoncé Stuns in a Mesh Dress With Matching Gloves