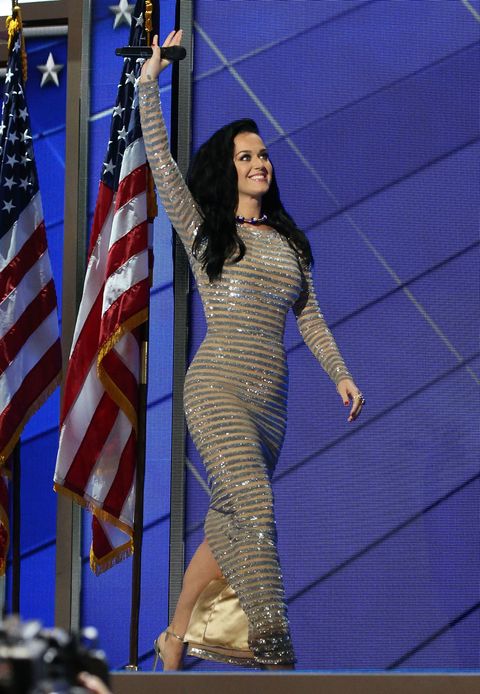 Hillary Clinton just shattered the glass ceiling by accepting the democratic presidential nomination, and Katy Perry was there to celebrate with a live performance of "Rise." And, like an insanely faithful labradoodle following her every move with unbridled enthusiasm, Orlando Bloom was right by her side.

The retired Lord of the Rings elf/professional heartthrob filmed his girlfriend's performance from the audience, and it was quite possibly the sweetest thing ever.

Look at his face:

Orlando Bloom is such an adorable boyfriend. He filmed Katy Perry the whole time she performed. Relationship goals pic.twitter.com/ijWchDvtFN

i'm cryin happy tears but also sidenote Orlando Bloom was takin pics of Katy Perry when she was performing pic.twitter.com/EKjtDpPKRx

It's like Husbands of Instagram meets Every Dad at a Ballet Recital Ever up in here. But it only gets better, because Katy and Orlando also served some (quite patriotic) behind-the-scenes relationship goals.

Four prom dates are better than one. Blessed to have friends that use their hearts & their voices to fight for a fair healthy balanced world, because it is SO SO important! I hope you join us 🙌🏽🌎 #dealmein #imwithher

Watch Katy's full performance below, because—hate to break it to Orlando who's arm is probably aching from holding up that iPhone—it's obviously on YouTube already.

Mehera Bonner Contributor Mehera Bonner is a news writer who focuses on celebrities and royals—follow her on Instagram.
Advertisement - Continue Reading Below
More From Celebrity
Selena Got Choked Up Reflecting on Her Love Life
Queen's Aides Are Struggling to Finalize Megxit
Advertisement - Continue Reading Below
Katie Holmes Is Struggling With Adulthood, Too
Doria Ragland Says Meghan Will "Always Be Okay"
The British Palace Is Hiring Social Media Manager
Why Harry Always Wanted to Leave the Royal Family
Sophie Turner Features in New Jonas Brothers' Vid
Chrissy Teigen Made a 'Cheer'-Inspired Video
Meghan and Harry Post an IG With a Hidden Message
Selena Gomez Just Got a Neck Tattoo